Paul Ryan Would be “Boehner on Steroids”

ACTION: Click here to tell your Congressman that you do NOT support any Congressman for House Speaker — including Rep. Paul Ryan — who is willing to compromise on Second Amendment rights!

Tell your Representative to Vote NO on Ryan 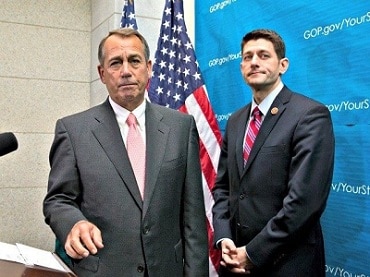 They said it couldn’t be done.

But, through your activism, you put pressure on sell-out Speaker John Boehner and helped bring his career to an unlamented end.

But there’s still work to be done.

Lest you think that things couldn’t get worse, one of the top candidates to replace Boehner is the compromising Wisconsin Representative Paul Ryan (R).

Ryan voted for the Thompson-King amendment last year — an anti-gun amendment that would add an additional $19.5 million to pay states to turn in more names to the federal gun-ban (NICS) list.

Already, more than 175,000 law-abiding veterans have lost their Second Amendment rights this way.  And, in states like New York, this money will pay to strip Americans of their constitutional rights, merely because they consult a psychiatrist and are prescribed a therapeutic drug.

Ryan has not had many tough (recorded) votes on guns, but the things HE WANTS to do should scare you.

In January 2013, when Universal Background Checks were on the table, Ryan — far from discouraging the Senate to defeat anti-gun legislation — encouraged a debate on an “acceptable” gun control package.

Speaking on Meet the Press in January 2013, Ryan expressed openness to new gun laws, saying the “question of whether or not a criminal is getting a gun is a question we need to look at.”

Ryan also opined: “We need to look into making sure there aren’t big loopholes where a person can illegally purchase a firearm.”

No, that wasn’t a typo. And, aside from what the sentence says, there is the fact that Ryan has adopted the gun control philosophy of the Far Left.

Ryan seems to think that any Second Amendment freedom that is not yet regulated by gun control laws is a “loophole” that needs to be “extinguished.”

A Speaker with these views would be disastrous for gun owners.

But that’s not all. There’s also his views on illegal voters.

Radical Democrat Luis Guiterrez (D-IL) is endorsing Paul Ryan because of his views on amnesty.

Gun Owners of America does not take positions on immigration issues, but we do oppose giving amnesty to persons who broke the law getting into this country, especially given the polls showing that illegals would vote for anti-gun candidates by an 8-1 margin.

Amnesty would reshape the American electorate and make it much harder to elect a pro-gun Congress and President.

Breitbart reports that, “Gutierrez and Paul Ryan have been longtime partners on efforts to open Americans borders. Indeed, Paul Ryan is arguably the most pro-amnesty GOP lawmaker in Congress ….”

Not only that, “Many amnesty opponents believe that if Ryan had been House Speaker, rather than Rep. John Boehner (R-OH), the Gang of Eight [amnesty] bill would have been sent to President Obama’s desk.”

In short, if you didn’t like John Boehner, the last candidate for House Speaker you will like is Paul Ryan.

After all, Speaker Boehner has personally given his endorsement to Paul Ryan by asking him to run for the speakership.

Ryan has still has not determined whether he will run, but he will be making his final decision soon.

So please let your Congressman know that you do NOT support Paul Ryan — or any compromiser like him — to be the next Speaker.

Tell him or her that we want a Speaker who will protect our rights, 100%.