Tell John Kasich NOT to Buckle on the Right to Carry

Click on the Take Action button to urge Gov. John Kasich to stand strong on the right to carry and to rebuff calls from the Cleveland police union to suspend the Second Amendment during the Republican National Convention this week.

We are living in dangerous times.

Three police officers were ambushed in Louisiana, with a fourth off 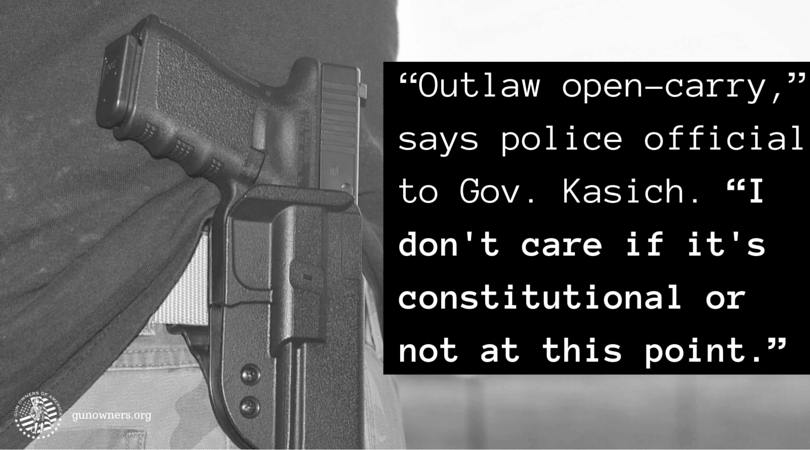 icer still fighting for his life.

This, of course, came right on the heels of the attack in Nice, France, where scores of innocent civilians were mowed down by an Islamic jihadi in a truck.

It goes without saying, determined killers who are filled with hate are going to use ANY instrument they can to carry out acts of violence.

Hence, we’ve seen 50 people killed by knives in China during a coordinated attack … 87 burned to death with matches and gasoline at a Bronx bar … and most recently, 84 mowed down by a 20-ton truck in France.

No sane person would have thought to call for “truck control” after last week’s terror attack.

But how different the situation is when the weapon of choice is a firearm.

The Mantra for Gun Control Grows: Chuck the Constitution and Ban Open Carry

So did you hear what police in Cleveland have asked Governor John Kasich to do?

After the tragic slaying of officers in Baton Rouge on Sunday, police in Cleveland demanded the suspension of the Second Amendment during the Republican National Convention this week.

“I want [Gov. Kasich] to absolutely outlaw open-carry,” said Stephen Loomis, the president of the Cleveland Police Patrolmen’s Association.  “I don’t care if it’s constitutional or not at this point.”

There you have it. “I don’t care if it’s constitutional or not.”

That’s the voice of a tyrant.  Restrict people’s rights, and let the Constitution be damned.

Of course, this is nothing more than Obama-styled gun control — just at the local level. Simply use a “phone and pen” to restrict gun rights by executive fiat.

So far, Gov. Kasich is standing strong, and has issued a response saying he “[does] not have the power” to issue an Executive Order to suspend the rights of law-abiding individuals.

Now, it’s up to us to give Kasich the grassroots support and let him know that America stands behind him.

Realizing that Kasich is coming under intense pressure, we need to let him know that we stand behind him.

It’s not uncommon to see a politician take a good stand (initially), but then to wilt after coming under repeated, intense pressure.

Of course, some gun owners don’t favor open carry, preferring to conceal their firearms instead.

Of those who open carry, many do so for the educational value it provides — showing others that average gun owners are safe, responsible people.

The important thing to realize is this:  If a Governor can unconstitutionally suspend open carry, then he can do the same for concealed carry.

It sets a very bad precedent if officials can suspend Second Amendment rights, as New Orleans did after Hurricane Katrina in 2005.

So this is a battle that affects ALL OF US — whether or not you’ve ever carried openly, even one day in your life.

Our Second Amendment rights are under attack, and we all need to speak out in unison.

Please take just a moment to send an email to Gov. Kasich, thanking him for his initial stand, and urging him to stand strong in supporting our Second Amendment rights.

As Ben Franklin reportedly said, “We must, indeed, all hang together, or most assuredly we will all hang separately.”