— Your immediate calls are needed

John Boehner is out of control. He’s now trying to DEFEAT pro-gun Republicans in the House.

Congressman Ken Buck (R-CO) stood by you and voted against the ObamaTrade scheme.

This legislation gives the President a “blank check” to amend an upcoming trade agreement and insert his anti-gun wish list into it. That means we could see gun import bans … ammunition bans … the full implementation of the anti-gun UN Arms Trade Treaty … illegal amnesty which locks in millions of new, anti-gun voters … and much more.

But this is a trade pact that Speaker Boehner really wanted. So now Boehner wants to punish Rep. Buck in order to scare Republicans into toeing the Party line.

In January, first-term Republicans in Congress elected Rep. Buck as head of the freshmen caucus. It’s an important position in Congress. 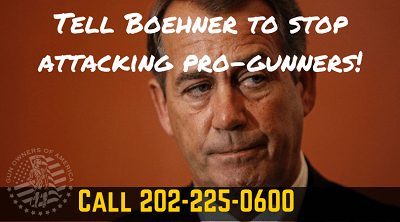 But Boehner has ordered freshmen Republicans to meet TOMORROW MORNING (Thursday) and quite possibly strip Rep. Buck of the position they gave him.

Call John Boehner IMMEDIATELY at 202-225-0600 and tell him to stop attacking Ken Buck. The meeting is just hours away.

“They are rushing a meeting in the next 24 hours. Rep. Elise Stefanik (R-NY) and Rep. Mimi Walters (R-CA), who are the go-to freshman congresswomen for Rep. John Boehner (R-OH) and leadership, has set the meeting for 8:30 am tomorrow,” reports Eric Erickson.

If Republicans vote to strip Buck of his position it would be a massive victory for the anti-gunners agenda.

And Rep. Buck isn’t the only one. In all, 34 Republicans voted to block the trade scheme that allows back-door gun control.

Boehner even seems willing to replace pro-gun Republicans completely, even if it means electing an anti-gun Democrat. Iowa’s Rep. Rod Blum, a strong pro-gun ally, is on Boehner’s target list.

“Colleagues worry that a vulnerable Iowa freshman [Blum] who crossed the three-term House Speaker may receive the political equivalent of the death penalty,” the National Review reports.

“I was elected by Iowans to stand up to the status quo in Washington, DC, and I refuse to turn my back on them with my first vote,” said Rep. Blum after voting against Boehner for speaker in January.

Following that vote, National Review reports that, “the National Republican Congressional Committee named twelve lawmakers who would receive support through its Patriot Program, a funding initiative dedicated to protecting the most vulnerable House members. Blum was not on the list, and he wasn’t among the eight Republicans chosen when the second round of program funding was announced in May, either.”

Withholding support from Blum could prove costly, as he narrowly defeated an anti-gun challenger in 2014.

Boehner is literally trying to defeat pro-gun legislators and replace them with anti-gun activists.

This must stop. The meeting is just hours away. Call John Boehner RIGHT NOW at 202-225-0600 and tell him to stop attacking pro-gun members Ken Buck, Rod Blum and others who dare to vote to protect our liberties.