The Pope has been taking aim at the Second Amendment for some time.  Last year, he referred to arms makers as “merchants of death.” Now the Pope has questioned the Christianity of manufacturers and owners of guns 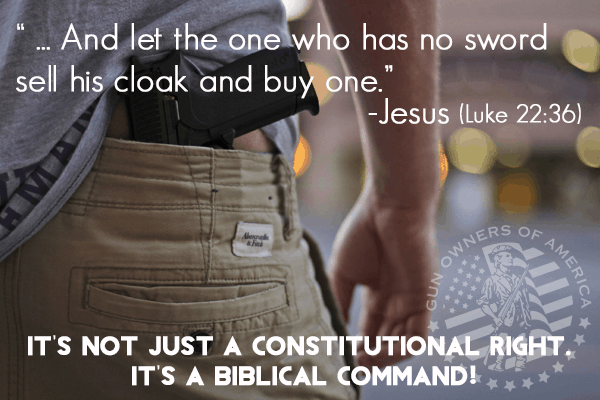 “It makes me think [of] people, managers, businessmen who call themselves Christian, and they manufacture weapons.  That leads to a bit of distrust, doesn’t it?” the Pope said.  “Duplicity is the currency of today… they say one thing and do another.”

Is the Pope prepared to have the Swiss Guard that protects the Vatican send back their guns to the manufacturers?  Are the manufacturers who supplied the arms to liberate Europe from the Nazis also not Christians?

Was the gun that Nick Meli used at the Clackamas, Oregon mall a “weapon of death”?  In 2012, Meli pointed his gun at an active shooter — an action that was followed by the shooter’s suicide.

Should we condemn the manufacturer of the gun used by a wounded Dr. Lee Silverman last year at the Darby Hospital in Pennsylvania to shoot and stop a gunman who had already killed a colleague?

Gun Owners of America has made available — at www.gunowners.org/fs9902.htm — an article entitled: What Does the Bible Say about Gun Control?  We hope the Pope will consider the mountain of Scripture referenced to show the Bible’s teaching that it is justifiable to use lethal force in self-defense.  The Pope’s thinking ends with good guys standing by — unless they have a badge — while dirt bags rape, murder and steal.

It is instructive that the gun control capital of America — a.k.a., Chicago — has the highest murder rate in the country.  By comparison, a very urban Fairfax County, Virginia has widespread gun ownership and readily available concealed carry permits.  The murder rate in Fairfax County is on a par with that in other countries where they enjoy lower homicide rates.

Larry Pratt is the Executive Director of Gun Owners of America, a national gun rights lobby representing more than one million gun owners.