Will a Senate Majority Support the Anti-Gun Compromise?

Please click on the TAKE ACTION button and send pre-written text urging your senators to OPPOSE the anti-gun Collins-Ayotte amendment (which is being offered to H.R. 2578).

Tell Your Senators to Vote NO on Collins-Ayotte

No, I’m not swearing.  It stands for Constructive Republican Alternative Proposal … C.R.A.P. 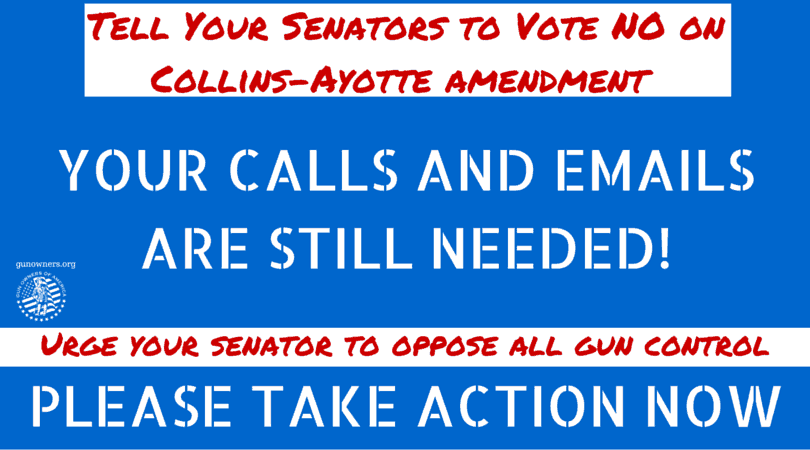 Republican Senators Sue Collins (ME) and Kelly Ayotte (NH) have suckered some of their fellow legislators into blindly following them off the proverbial cliff.

And sadly, Majority Leader Mitch McConnell (R-KY) has refused to block this vote, telling Collins that he will allow her to offer her amendment.

So I’m providing you an email response to send to your Senators.

But since it’s possible those emails won’t get read in time, I would still encourage you to make calls.

Please dial your senators at 202-224-3121, and urge them to oppose the anti-gun Collins-Ayotte amendment.

I won’t repeat everything that I said yesterday.  You can read that here.

But it’s important to realize the central problem with the Collins-Ayotte text. And it’s the same problem inherent to the anti-gun Feinstein amendment that we defeated on Monday.

Namely, the Collins-Ayotte language allows a highly politicized official like Attorney General Loretta Lynch to take away your Second Amendment rights by fiat without any due process.

Remember how, years ago, the Obama administration included conservative groups, including the gun lobby, in a list of potential domestic terrorist groups?

You think they wouldn’t LOVE to add tens of thousands of gun owners into their government watch list?  They’ve already said they think you’re a terrorist!

Empty Promises by Collins and Ayotte

The Collins-Ayotte amendment presumes it can compensate for this infringement by a process allowing you to “get your rights back.”

What they don’t tell you is that this process is virtually impossible to invoke.

It’s “due process” only for those who can afford to put up a substantial amount of money ahead of time, with the hope that they will get attorneys’ fees refunded to them after the fact.

After all, the Obama administration has already perfected the harassment of gun owners. They have refused to comply with federal law which orders them to tell persons denied by NICS why they have been denied the right to purchase a firearm.

Obama’s henchmen do so, ever callously, while issuing the bureaucratic equivalent of “So sue us!”  But, if you can’t figure out the reason for your denial, you can’t comply with the 60-day appeal filling process.

And it gets worse. Remember the FBI’s announcement that they were no longer processing gun owners’ appeals?

That’s right, if you are illegitimately denied the right to buy a gun by Obama’s Justice Department and you appeal it, your paperwork lands on an empty desk.

There are many reasons for opposing this bill.  And you can see what I sent to U.S. Senators yesterday and today.

We need to encourage Senators to focus instead on repealing Gun-Free Zones and passing concealed carry reciprocity.

So please use the pre-written text that I’ve provided you to tell your two Senators to OPPOSE the Collins-Ayotte amendment and support pro-gun initiatives instead.

P.S.  Please send the pre-written text urging your Senators to OPPOSE the anti-gun Collins-Ayotte amendment.  And please follow it up by calling your Senators at 202-224-3121, urging them to support concealed carry reciprocity and the repeal of Gun Free Zones.