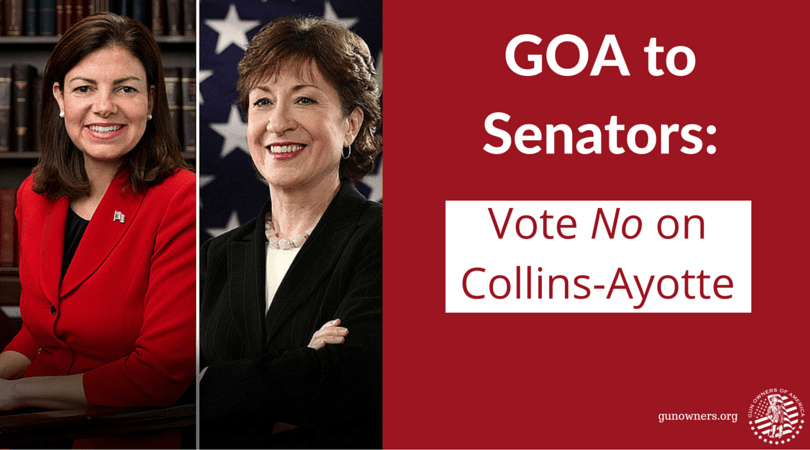 Gun Owners of America is encouraging you to vote NO on the Collins-Ayotte amendment — and will rate this as an anti-gun vote.

Namely, Collins-Ayotte allows a highly politicized official to take away constitutional rights by fiat without any real due process — and presumes it can compensate for this by a process to “get your rights back” which is virtually impossible to invoke.

And while Collins-Ayotte purports to allow due process, it does so only for those who can afford to put up a substantial amount of money ahead of time, with the hope that they will get attorneys’ fees refunded to them after the fact.

I mentioned yesterday that this amendment will NOT contain some of the protections for gun owners’ rights that were present in the Cornyn amendment.

In addition to all these problems, I wanted to emphasize that this “review and appeals” process will NOT benefit the average gun owner.

The [appeals] process will be made even more lengthy and expensive by the fact that it must be filed in the docket-jammed courts of appeals — which have recently, in all but two cases, been “packed” with anti-gun Obama appointees, largely by use of the “nuclear option.” The non-specific “expedited consideration” provisions may help a little, but not much.

The “right to review” is triggered by an official notice of denial issued by the Attorney General.  But section _____(a)(2) specifically gives the Attorney General the written statutory right to refuse to assign a unique identification number, apparently indefinitely. And most large retailers refuse to sell a firearm until this unique identification number is received, even if they are legally entitled to do so.

You may not be aware of this, but the Obama administration has perfected the harassment of gun owners. The Justice Department has refused to comply with the statutory requirement that they tell prohibited persons why they have been denied the right to purchase a firearm.

They do so, ever callously, while issuing the bureaucratic equivalent of “So sue us!” And, if you can’t figure out the reason for your denial, you can’t comply with the 60-day appeal filling process.

As stated by our Legislative Counsel:

If persons subject to denials have suffered these consequences, persons subject to inaction have had an even worse time getting a response. Last fall, the Justice Department announced that it has decided, illegally, to simply defund the processing of appeals.

But there are other problems with the Collins-Ayotte amendment.  Again, as stated by GOA’s Legislative Counsel:

Under section ____(d)(3), the AG is specifically authorized to classify and withhold any information she chooses. A really expensive attorney with a high security clearance might be able to get around this, but still wouldn’t be able to circumvent assertions of “privilege.”

Under section ____(d)(4), discovery is prohibited, except under extraordinary circumstances. Part of the proceedings will be “ex parte” (section ____(d)(6)), which means that the most important parts of the adjudication will consist of meetings, in chambers, between the judge and the government -– with the petitioner and his attorneys excluded.

The procedure is de novo, but it is predicated on a “nothing-burger” standard that rests on the Attorney General’s perceptions.

Senators Collins and Ayotte trumpet the point that, after the fact, the court “shall” award attorneys’ fees to the prevailing party.

But as Mr. Hammond concludes:

Collins may not understand that “legal fees” provisions have been in place for people fighting the government since the Buckley amendment in 1976. But these provisions have had little impact for non-wealthy litigants forced to pay the costs of litigation up-front and faced with, at best, a slight chance of reimbursement at the end of the process.

In short, this sham procedure represents no remedy at all in the real world, and it certainly does not offset the fact that the individual’s constitutional rights were stripped preemptively by fiat by a politicized official with virtually unfettered discretion and a demonstrable animus toward guns.

For all these reasons, Gun Owners of America urges you to vote NO on the Collins-Ayotte amendment — and to focus instead on repealing Gun-Free Zones and passing concealed carry reciprocity.

Again, GOA will be rating the Collins-Ayotte amendment as an anti-gun vote in its year-end rating.