Another Gun Ban Repeal is Moving Through Congress

Click on the Take Action button to urge your Representative and Senators to vote for H.R. 1181, a bill to repeal the military veterans gun ban.  A vote in the House is expected on Thursday, March 16.

Over 257,000 Veterans Could Get Their Guns Back Within Months

It has been one of the most contemptable chapters in American history.

Over 257,000 veterans — fresh from putting their lives on the line for American freedom — have returned to our country, only to be stripped of their constitutional rights without due process.

But this chapter is about to come to an end. 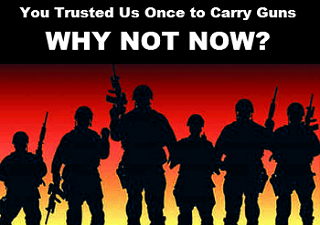 Tomorrow, on the House floor, the House will consider H.R. 1181 — a bill to restore the rights of veterans to keep and bear arms.

So here is the current situation:  over 257,000 veterans who have experienced trauma in Vietnam, or Sarajevo, or Kabul, or Mosul, have made the mistake of seeking counseling from the Department of Veterans Affairs.

VA psychiatrists, with no due process whatsoever, then proceeded to appoint a “guardian” over the finances of these law-abiding veterans — and have used this appointment as an excuse to send their names to the NICS secret “gun ban list” in West Virginia.

In some cases, police have arrived at their homes to take away the guns they already have.

And those veterans who have kept a single gun for hunting or self-defense risk a felony conviction and a decade in prison.

All for honorably serving their country.  And all at the behest of cowards like Barack Obama who wouldn’t have thought of risking their lives for America’s freedom.

First, under H.R. 1181, a veteran cannot legally have his gun rights taken away without a finding by a judge, magistrate or judicial authority.

This makes the bill far better than some of its counterparts — which have frequently allowed an administrative board or commission to take away veterans’ constitutional rights.

Second, under H.R. 1181, a veteran can lose his guns ONLY if he is a danger to himself or others.  No more can a veteran lose his constitutional rights because a guardian is administering his checkbook.

Again, this makes the bill far better than some of its counterparts, which retain the “guardian” provision.

Third, because of these two provisions, we believe the 257,000 law-abiding veterans who have unlawfully had their rights taken away should have them restored — automatically.

Certainly, Donald Trump can use this statute to make sure that all of their names are eventually taken off the NICS list.

So please urge your Representative to vote for H.R. 1181.

But, EVEN MORE IMPORTANT, contact your senators demanding that they bring H.R. 1181 immediately to the Senate floor as soon as it is received from the House.  And demand that they pass it immediately without tinkering with it or delaying it in any way.

Veterans have waited long enough. It is time to give them relief – and do it YESTERDAY.

There is a vote expected on H.R. 1181 in the House tomorrow (Thursday).

So please contact your Representative and Senators right away in favor of H.R. 1181.