S. 54 Would Effectively Ban Even More Guns than Feinstein’s Bill!

He wants to prohibit your rights? We don’t think so. 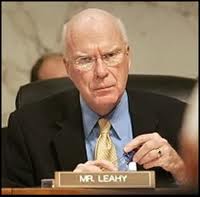 The Senate is about to vote to make all of these into federal crimes, turning gun-owning Americans into prohibited persons — meaning they would NOT be able to own a firearm anywhere in the country!

We have talked about some of the problems with Senate Judiciary Committee Chairman Patrick Leahy’s gun “trafficking” bill.  Leahy apparently thinks that, if he puts a shiny label on the bill, he can ban as many guns as he wants.

But, at its core, S. 54 would make it a federal crime to violate virtually any state gun law.

Section 5 creates a new “prohibited person” classification which makes it a federal crime to transfer a gun if “prohibited by State or local law … from possessing [or] selling … THE firearm or ammunition.”  [Emphasis added]

So do you like Andrew Cuomo’s massive gun ban?  He bans more types of guns than would Feinstein’s so-called “assault weapons” ban.  Yet under S. 54, transferring a firearm banned by Cuomo becomes a federal crime, punishable by ten years in a federal prison — at least for New York residents and possibly for others.

Do you like California’s proposed ammunition ban?  That also becomes a federal crime — at least for California residents and perhaps for others.

So you like gun licensure?  A person who doesn’t have a license in New York and Illinois is also “prohibited by State … law … from possessing [or] selling … the firearm.”  This becomes a federal crime.

Do you agree with D.C.’s efforts to ban firearms by imposing a microstamping requirement?  Transferring a non-microstamped firearm would become a FEDERAL crimeunder S. 54 — at least for D.C. residents and maybe others.

By voting for S. 54, your senator will be making guns banned by Andrew Cuomo’s expansive law into federally banned guns, as well.  He will be saying, “I like every word of gun control which Rahm Emanuel is pushing.”

By the way, Senator Leahy is trying to sell S. 54 as a supposed crackdown on gun traffickers.  But there’s not one word in this bill that would punish (or prevent) what happened in Fast & Furious, where our government helped send thousands of illegal guns south of the border, resulting in the murders of hundreds of Mexicans and at least one federal agent.

ACTION: Click here to contact your senators.  Demand that they oppose S. 54 and speak out against it.