Click on the Take Action button to urge your congressman to cosponsor H.R. 38, a genuine reciprocity bill that recognizes the right of all law-abiding gun owners to carry throughout the country — even those who live Constitutional Carry states! (Link no longer active)

I want to thank you so much for partnering with Gun Owners of America. 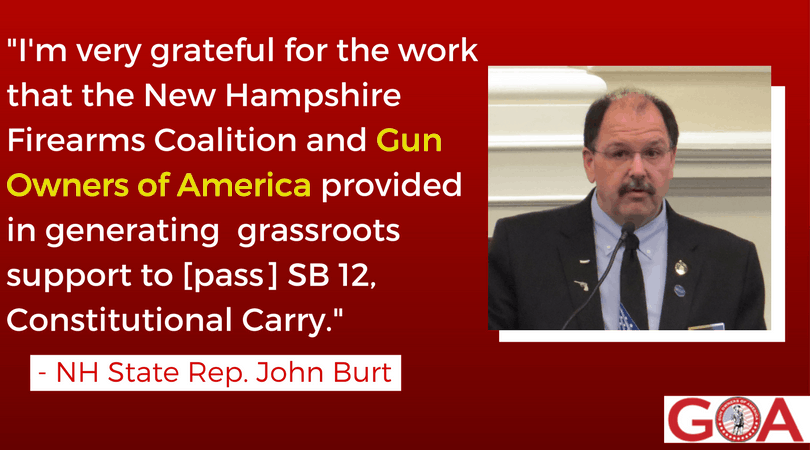 Your activism makes such a difference — you just can’t imagine how much so.

But I see it every day.

This means Granite Staters will no longer be forced to seek permission to carry concealed or be registered like sex offenders before exercising their right to protect themselves.

The battle to enter New Hampshire into the Constitutional Carry Club was a long, hard campaign.

But it wasn’t easy — not in the slightest.

It was a struggle where there were dozens of grassroots alerts, in conjunction with the state gun rights group that we allied with, and two gubernatorial vetoes by the previous governor. 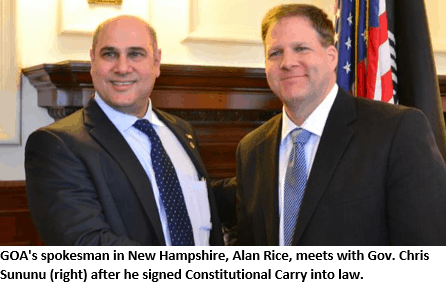 There was a lot to overcome.

The no-compromise group GOA allied with was the New Hampshire Firearms Coalition, and they did a yeoman’s job lobbying legislators and educating the voters in the state.

Their chief spokesman, Alan Rice, represented GOA in the halls of the legislature and in the governor’s office.

Rice is a fully sworn police officer and serves as the firearms instructor and armorer for a mid-size, rural police department.

You can click here to see him testifying before the legislature in favor of Constitutional Carry.

“Bloomberg’s Billions” Going Down the Drain

Getting Constitutional Carry through the legislature meant that Granite Staters had to overcome LOTS of outside money.

They ran a full page ad in a big city newspaper.

But all of this was to no avail.

Consider the action alert on the “angry mommies” Facebook page, which Bloomberg started in New Hampshire.

That alert, urging people to contact Gov. Sununu, got only SIX LIKES.

It’s clear that while the gun grabbers are well-financed, they don’t have the grassroots behind them.

And that’s why I say that activism from people like you makes all the difference in the world.

And it’s the reason that I’m so hopeful when it comes to passing National Concealed Carry Reciprocity. 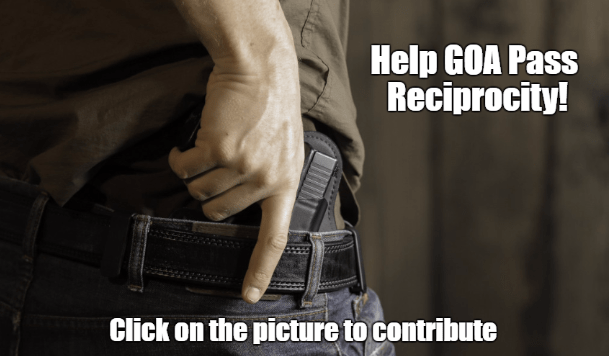 While his reciprocity bill will benefit concealed carry permit holders in every state, it will especially help those from Constitutional Carry states.

Under H.R. 38, there now would be 13 states where residents could carry firearms nationwide without being registered at all.

H.R. 38 currently has 157 cosponsors, and you can go here to see if your congressman has cosponsored the bill.

We need to keep the heat on the politicians in Washington, D.C.

If your congressman has not cosponsored H.R. 38, please take a moment to send an email right now.