Gun Grabbers Using Florida Shooting to Come After Your Guns

Our thoughts and prayers are with the victims and their families in Florida. 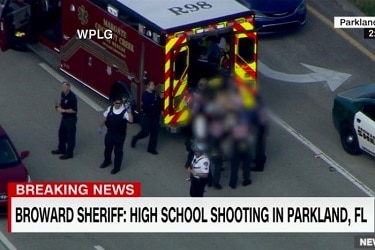 I’m sure that by now, you’ve heard about the tragic school shooting that took place yesterday in Broward County.

And if you have been following the news, no doubt you’ve been disgusted by the commentary.

It’s getting quite old.

Here we have another shooting in a Gun Free Zone.

Another gunman was able to roam about freely without any armed teacher or principal opposing him — even though 81% of police officers support arming teachers as a means to stopping school shootings.

Here we see yet again that the anti-gun laws of Florida — not to mention Congress — have disarmed responsible adults and prevented them from protecting innocent children.

Going back to 1950, over 98% of the public mass shootings in this country have occurred in Gun Free Zones.

But who does the anti-gun Left want to blame? You!

Sen. Chris Murphy stood on the Senate floor just moments after the shooting took place and blamed the LACK of gun control in this country as the real culprit:

“As a consequence of our inaction,” Murphy said, “we are responsible for a level of mass atrocity that happens in this country with zero parallels anywhere else.”

That statement is just flat out false, as the Crime Prevention Research Center points out. See the CRPC article here showing that mass shootings occur at much higher rates in other countries that have stricter gun control laws.

And it’s also untrue that this is the 18th school shooting this year — which is a lie that media pundits and congressmen have been repeating ad nauseum for the past 24 hours.

Fight Over Gun Control is About to Ramp Up

You can be sure that Senate Democrats will try to use this tragedy to resurrect the (misnamed) Fix NICS legislation.

I just want to assure you that Gun Owners of America will continue to fight every bit of gun control … we will fight every compromise … and every attempt to infringe upon the rights of law-abiding people like you and me.

No doubt, we will see a resurgence in the push for gun control in the U.S. Congress.

Please circulate this email to encourage your pro-gun friends and family to get on the GOA email list.

We are going to need as many pro-gun Americans as possible sending emails and making phone calls to their congressmen.

Thanks again for standing with us.