GOA’s Updates to you on the ongoing fight for your constitutional rights.

Solicits horror stories from its members
Events have been moving so fast and furiously (no pun intended) that we have not had an opportunity to give you an update on the rules fight — or to solicit your help in connection with a pivotal ongoing battle.

The Senate has reached its decision on what to do about its rules.  And the outcome is neither a complete victory nor a complete loss.

On the good side:  The Senate DID NOT pull the “nuclear trigger.”  It did not do what we feared most — and that was to decide that 51 senators could, by brute force, do whatever they wanted, irrespective of the rules.

As for the bad:  The most serious change is a two-year “special order” — which will expire in two years at the end of the 113th Congress.  (How convenient.  The Democrats put a time limit on this onerous rule in case they are no longer in the majority after the next elections.)  That “special order” allows Harry Reid to proceed to the text of legislation without a filibuster of the “motion to proceed” — but only if he pays the penalty of allowing Republican Leader Mitch McConnell to offer the first amendment.

What this means, as a practical matter, is that we cannot afford for ONE WORD of gun control to pass the Senate — NOT ONE WORD.  In the past, pro-gun Senators could have filibustered a gun bill and prevented it from going to conference (when it was suspected that conferees would take a relatively harmless bill and make it worse).  But under the new rules, there is nothing we can do to keep a so-called “innocuous” gun bill from going to conference where legislators can then write the Feinstein amendment or a national gun registry into the bill. 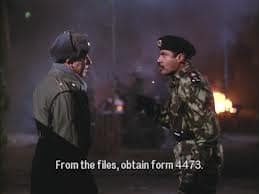 As you know, we believe that — while we can take nothing for granted — the Feinstein gun ban has an uphill battle in the Congress.

Thus, of all the anti-gun proposals in Obama’s package, we view the biggest threat to be the universal background check — which would set up a framework for a national gun registry and gun confiscation.  It would also be even more of a slap-in-the-face to the 150,000 veterans on the NICS list who have been deemed “unworthy” of exercising their Second Amendment rights.

But so far, of all of the arguments against the universal background check which we have made on the Hill, the one that seems to have attracted the most interest is when we tell them that the ATF has been going into gun stores and illegally copying the 4473’s.

We have received numerous accounts from members of this being done.  But we could always use a lot more.

If you know of any instance where the ATF has illegally gone into a gun store and illegally copied a 4473, we would ask you to please write us about it.

We can redact your name and any identifying information if you wish.  But we guarantee you that we will take your information and present it to members of the House and Senate who have expressed shock and interest that this was being done.

You can use the “contact” button on the GOA website to send us your stories. Click here for the direct link. Select “information submission” as the Department to where your email should be sent.