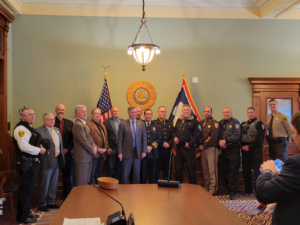 SF0102 makes it illegal for state and local officials to enforce or cooperate with unconstitutional gun control.  The law provides a criminal penalty of a $2,000 fine and up to one year in jail for these infractions, giving this law one of the nation’s strongest criminal penalties.

Had they been able to pass their own deeply flawed version (SF87), it would have been another story, but the fact is that their version was dead.  It would have been dead in a non-budget year, but with this year’s requirement that legislation receive a two-thirds vote for introduction, SF87 was particularly moribund. 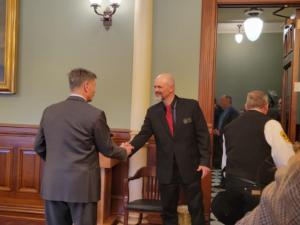 What this ostensibly pro-gun group appears to be saying is that, “if we can’t take credit for it, we will oppose any step by others to advance the Second Amendment.”

As GOA has pointed out for weeks, the failed bill (SF87) had insurmountable political problems, but it also had substantive legal problems.

SF87 would have specifically authorized Wyoming law enforcement to enforce gun taxes which were not “new.”  Presumably, this was for the purpose of grandfathering Pittman Robertson excise taxes which have funded wildlife conservation since 1937.

This was a HUGE FLAW because the major gun control steps being taken by ATF under the Biden administration involve taxation of guns under the 1934 National Firearms Act (NFA).  The bump stock ban, the pistol brace ban, and the idea of reclassifying AR-15s as machine guns all involve reclassifying guns and accessories in such a way as to impose a preexisting tax.  Are these “new taxes”? There is a strong chance that a court would say they are not, and if not, SF87 would have left the aforementioned Biden initiatives fully enforceable in Wyoming.

Some of those who supported SF87 claim that the bill is a virtual clone of the Missouri SAPA law, which GOA supports.  However, nothing could be further from the truth.  SF87 was a MUCH weaker bill in several ways.  For starters, SF87 contained the HUGE FLAW mentioned above — a flaw which would allow the federal government to enforce gun control under the guise of an existing, “old tax.”

In addition, SF87 deleted the Missouri SAPA language that prohibits the enforcement of court orders.  All Biden would have needed to do to defeat SF87 would have been to get an order from a pliant court making the law meaningless.

And then there’s the flaw that would have likely resulted in the ENTIRE TEXT of SF87 being invalidated by the courts.  Take this example as background: GOA has challenged the 1986 Gun Control Act (GCA) and the 1934 NFA, but sadly, the courts have routinely upheld these horrendous laws.  So, the mistake that SF87 makes is that it implicitly attempts to invalidate the GCA and NFA, but without containing a severability clause.

This means that if SF87 were to pass — and if the courts were to strike down just one provision of the law as it relates to the GCA or NFA — then the ENTIRE LAW (as contained in SF87) would fall, and we would be back to square zero.  The failure to contain a severability clause is a huge mistake that would take down this entire bill.

One final point.  Opponents of SF0102 have made a huge issue regarding how the law will be enforced. They have attacked the character of all Wyoming law enforcement officials and prosecutors, claiming no one will ever prosecute any official for violating the law.  These opponents are hung up on the “civil approach” contained in the failed SF87 which allows citizens to sue in civil court.

To be fair, in a perfect world, we would like a bill to have both options (criminal and civil), but it is time people stop assuming the civil route in SF87 was somehow perfect, while the criminal route in SF0102 means nothing.  That is simply not true.

Wyoming prosecutors are elected.  If they don’t criminally prosecute those who enforce “unconstitutional” gun control, the people have recourse against both the prosecutors and the elected sheriffs.

Wyoming judges are appointed then stand for retention elections.  That means they don’t have an opponent.  They get a straight up or down yes or no vote.  If voted out, the Governor appoints another judge.

Who is going to be more responsive to the Wyoming citizen — an elected prosecutor who faces opponents every four years or a Wyoming judge who is appointed and faces a retention election?  The reader can decide.

Are there improvements which can be made to SF0102?  Absolutely.  GOA is committed to working with members of both chambers and law enforcement to do just that in future legislative sessions.  However, don’t tell us that a Second Amendment victory was not achieved with the signing of SF0102 last week.

I have been engaged in the Second Amendment landscape for over four decades, and there is never a time when a Second Amendment victory is worse than an anti-gun victory.  It is time all Wyoming Second Amendment advocates acknowledge the SF0102 victory and work together to make the law even better in the future.