If you live outside of Florida, you can still do your part and help. Call Governor DeSantis directly at 850-717-9337 along with emailing him at [email protected] Tell him that Constitutional Carry must be added to the special session. Why? Because you will visit Florida more often if Constitutional Carry is passed and signed into law.

As your State Director, I have good news to report! A special legislative session has been called and Governor Ron DeSantis wants Constitutional Carry to be one of the three issues voted on and brought to his desk for his signature.

Constitutional Carry’s legislative sponsor, Representative Anthony Sabatini, called Gun Owners of America today and specifically thanked us (you) for all the hard work that we’ve put in to make permitless carry an issue that lawmakers can’t ignore. He said, “This couldn’t have happened without the hard work you guys have put in. You guys made it an issue they can’t ignore.”

You can watch the video of GOA on the ground at the State Capitol reporting this news.

I would love to have property insurance, I would love to have data privacy, I would love to have constitutional carry, there’s a lot of great things. But you know, we just went through a legislative session where they failed to deliver on some of those priorities,” DeSantis said. “I will ask the legislative leaders, is there something that you can get across the finish line? And I will encourage them to do that. Becuase I think there are a lot of key things that we could do. The initial call will just for the congressional maps. But it is absolutely possible that when we convene, they actually convene for the special session, that you can see additional issues raised in it.

That slap you just heard wasn’t Will Smith at the Oscars. Oh no, it was Governor DeSantis smacking the legislature, publically, for their failure to pass Constitutional Carry. Even after he told them to put it on his desk.

On January 11, during the State of the State Address, the Governor called out anti-gun and weak-willed lawmakers that block the advancement of Second Amendment legislation. 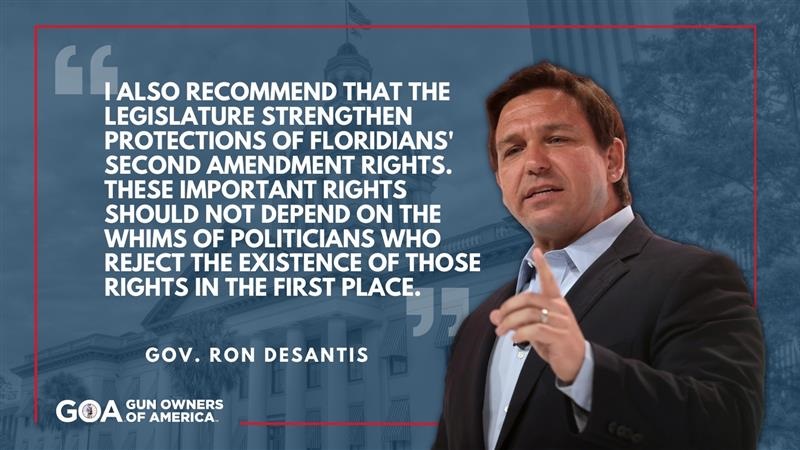 Florida Governor Ron DeSantis calling out anti-gun lawmakers during the State of the State address, January 11, 2022.

As I have said in our previous alerts: ACTIONS SPEAK LOUDER THAN WORDS. It seems that Governor DeSantis fully understands that and is currently flexing his political muscles.

I still need you to call and email the Governor to send him a very simple message:

The legislature serves us, the people. We have the power to motivate and make Constitutional Carry an issue that no lawmaker can escape.

So be proud and be LOUD!

Don’t forget to call (850-717-9337) and email the Governor to demand Constitutional Carry be officially part of the special session.