WV: Tell Sen. Manchin to Make ‘NO DEALS’ with Schumer

Urge Senator Manchin to Fight Back!

Senator Joe Manchin has a problem. A big problem. 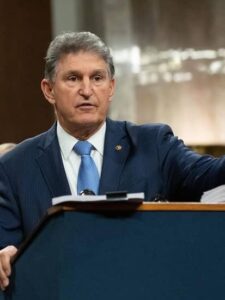 He is a Democrat.  And he is a Democrat in West Virginia — a state that’s not particularly in sync with the Democratic Party’s anti-gun agenda.

And yet, Senator Manchin is the Democrats’ 50th vote in the Senate (51 with Kamala Harris).

The Democrats are preparing to abolish the filibuster, so that it will be Senator Manchin’s tie-breaking vote that passes the total gun confiscation, Green New Deal, open borders, a ban on fossil fuels, D.C. statehood, court packing, ballot harvesting, reparations, and so forth.

So how does Senator Manchin remain a Democrat — without alienating his voters so much that he can’t possibly be reelected.

To begin with, Senator Manchin has loudly and publicly proclaimed that he will not vote to abolish the filibuster.

But Senator Manchin realizes there’s a back door here:  Once a year, the Senate considers legislation to reduce the deficit — the so-called “reconciliation bill.”  And the reconciliation bill CANNOT be filibustered.

So, if the Democrats stick their radical agenda onto the reconciliation bill, they can pass it with 50 votes in the Senate — without a single Republican vote.

Supposedly, the “reconciliation bill” can ONLY contain provisions that reduce the deficit.

This is where Senator Manchin comes in.  If he votes against Schumer’s fraud scheme, Schumer will be unsuccessful in passing the Far-Left’s anti-gun agenda by party line.

If Senator Manchin votes with Schumer, nothing else matters — including Manchin’s “supposed” support for the filibuster.

Chuck Schumer will have made the filibuster irrelevant.