Why more Utah teachers are considering carrying guns in the classroom

After a childhood spent surrounded by gun violence in South Africa, Erin Thomas is, as she puts it, “anti-gun in a lot of ways.”

It’s a description seemingly at odds with Thomas’ newly-acquired permit to carry a concealed firearm.

But with what can feel like an endless cycle of school shootings in the news, Thomas, an assistant principal at two elementary schools in the Alpine School District, has been increasingly forced to consider a frightening question for educators: What would I do if it were my school?

If the unthinkable were to happen, Thomas says, she wants to be able to take action — to be “helpful,” rather than helpless. 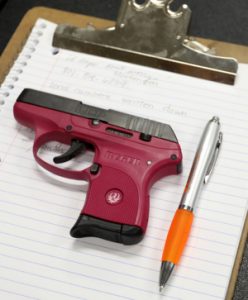 Thomas and 31 other teachers, principals, and counselors filled a classroom at the Utah County Sheriff’s Office on Wednesday for a concealed carry instructional course, part of a comprehensive academy to help educators prepare for potentially violent situations.

An earlier lesson focused on de-escalation techniques. Later in the month, the class will receive hands-on training at a shooting range. It’s the first time the sheriff’s office has offered such an academy….

The Utah County Sheriff’s Office isn’t the only law enforcement agency to offer firearms training to Utah teachers. The Uintah County Sheriff’s Office offered a two-day course for educators last month that similarly included shooting lessons at a gun range and concealed carry instruction. That training was funded by a donation from a local chapter of Safari Club International.

If teachers do choose to arm themselves, [Utah County Sheriff Mike] Smith says, training them in proper gun safety and shooting techniques could reduce the chances of an accident happening….

The Utah County academy doesn’t just include firearms training, and some participants have said they have no interest in carrying a gun, Smith said. Roughly half the class signed up for a concealed carry permit; a few others already had permits. Over the course of the month, the educators will also learn self-defense skills and emergency medical techniques.

[PE teacher Jennifer] Jacobsen’s colleague McKenzie Wilson, also a P.E. and health teacher at Willowcreek, said she chose to participate in the academy in part because of past experiences at work. Several years ago, she said, a student made a death threat against her. She sent the student to administrators; he was returned to her classroom several minutes later.

“It just feels so real,” Wilson said. “I need to know how to protect myself and my students, because it’s not coming from higher.”

Read more at The Desert News