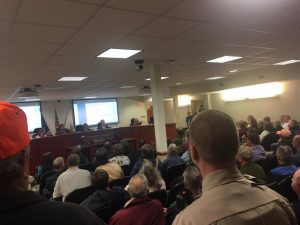 Board of Supervisors Meeting

As Democratic Virginia state legislators are considering a host of new gun control bills as they will have majorities in the statehouse, some sheriffs are voicing their support for the counties that are declaring themselves as Second Amendment sanctuaries.

“I am in favor of the Second Amendment Sanctuary. I believe we need to send a message to Richmond that our citizens will take a stance. My deputies and I take an oath to uphold the Constitution and that’s what we will do,” Rappahannock County Sheriff Connie Compton told Townhall.

It should come as no surprise that the more rural counties and cities in the commonwealth are having an easier time passing Second Amendment sanctuary resolutions. Having law enforcement backing those resolutions is critical for them to have any kind of effect.

Over 30 counties have declared themselves as Second Amendment sanctuaries so far, with many others planning on holding meetings to discuss such resolutions. The county meetings that have occurred are packed, with the vast majority of those in attendance being in favor of sanctuary status for firearms.

“It sends a strong message to Richmond that we support the Constitution,” King George County Sheriff Steve Dempsey told Townhall…