The scene before our eyes resembled something from a disaster film. Roadblocks, fencing, sanitized police checkpoints, sniper’s nests, vehicles loaded with heavy-duty surveillance equipment darting through the streets as an armored vehicle called The Rook lurched onto the field. An armored track vehicle built on a Caterpillar chassis, The Rook is armed with a hydraulic breaching ram and gun portholes. 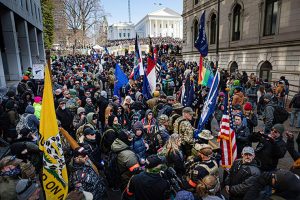 All these siege engines revolved around a Damoclean centerpiece: a great iron cage in which unarmed protesters would be contained. This scene was not lifted from the silver screen, however, but was the Virginia State Capitol on the eve of Lobby Day, an event in late January in which tens of thousands of law-abiding gun owners would rally for their right to keep and bear arms.

Even before the nationwide government crackdown in the wake of the COVID-19 virus, the unprecedented reaction of Virginia’s government against civilian protesters showcased the potential for authoritarianism to rear its head in America, a trend later confirmed by the repressive measures against coronavirus quarantine protesters taken by state governors such as Michigan’s Gretchen Whitmer. The actions of Virginia, the Mother of Presidents, against its own disobedient citizens has told us something of what lies beneath the surface of our nation’s political future.

The first shot in Virginia’s battle, the latest phase of the culture war, was fired months before, when the Democratic Party took control of the Virginia General Assembly.

“I’m here to officially declare today, Nov. 5, 2019, that Virginia is officially blue,” Governor Ralph Northam triumphantly told a crowd of supporters. With his feet planted firmly in the loamy soil of political radicalism, Northam declared with a smile that he would set his hand against the Second Amendment, starting with red flag laws prohibiting undesirables from owning guns, and bump stock and magazine bans that would retroactively make felons of thousands. Seeing the smoke over Richmond, Virginians wasted no time constructing political firebreaks around their communities.

The Democrats, nevertheless, doubled down—Northam declared a state of emergency ahead of Lobby Day. Included in that declaration was a ban of firearms from the grounds of the Virginia State Capitol complex, which stood conspicuously at odds with a clause in the state’s constitution that prohibits the banning of “the otherwise lawful possession, carrying, transportation, sale, or transfer of firearms” under a state of emergency declaration.

Similarly unconcerned with facts, the media, too, piled on against Virginians. “Reporters covering tomorrow’s white nationalist rally in Virginia,” NBC’s Ben Collins wrote on Twitter, “I’m absolutely begging you: Verify information before you send it out tomorrow, even if it’s a very sensational rumor you heard from a cop.” He deleted the tweet after it became clear that Lobby Day would not in fact be a neo-Nazi affair—the event came and went with little drama. Anywhere between 22,000 and 60,000 heavily armed people showed up for the event, carrying more firepower than your average American soldier, not infrequently wearing body armor over Hawaiian shirts. Many unarmed demonstrators happily walked into the iron cage—redubbed the “freedom cage”—under the watchful eyes of their armed allies and law enforcement.

“The giant has awoken,” John Crump, the Virginia state director for Gun Owners of America (GOA) told me. “What you saw on Lobby Day is people traveling for hours and giving up a day’s pay to fight for their rights,” Crump said. “We think gun owners in the Commonwealth know they can no longer sit on the sidelines.” The GOA and the VCDL filed for an emergency injunction to overturn the governor’s gun ban before Lobby Day. I asked Crump if Virginia has become the epicenter of an emboldened political current striving against the Second Amendment. “I think it is ‘ground zero’ for the gun confiscation movement,” he said. The events of the day, however, made it clear that Virginians wouldn’t go quietly into the night. “It might take time, but we will be able to roll back these Draconian gun laws through future elections and the courts.”