Governor Northam’s anti-gun laws are now in effect in Virginia. Rest assured, Gun Owners of America will use every tool we have in our arsenal to get these anti-freedom laws overturned. 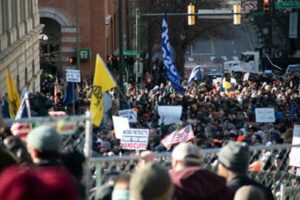 Most firearm transfers now require a background check except for transfers between immediate family members, gun rentals, or to prevent immediate harm. A consequence of this law is that 20-year-old Virginians will no longer be able to acquire handguns since an FFL cannot transfer a handgun to anyone under the age of 21.

Gun Owners of America, along with VCDL, is challenging this law in a Lynchburg court. We think it is clear this law violates Article 1, Section 13 of the Virginia State Constitution. Background checks lead to registrations, and registrations lead to confiscations

Virginia has also enacted a “one handgun a month” law. Citizens without a concealed handgun permit are now limited to only being able to purchase one handgun a month. According to the Virginia State Police, handguns purchased in the last 30 days before the law went into effect will be counted against the purchaser’s limit.

Virginia has also enacted a so-called “Red Flag” law.  This type of law is the same as the law that took the life, Gary Willis, in Maryland. The law not only infringes on a citizen’s Second Amendment right, but also their Fourth and Fifth Amendment rights. It violates the Due Process clause of our Constitution, because under this law, people are presumed guilty until proven innocent.

A bump stock ban is now in effect in the Commonwealth. Bump stocks are already banned at the national level. GOA strongly condemns the ban on any level of Government. The new law DOES NOT prohibit binary triggers.

People named in a protective order are banned from possessing firearms. The target of the protective order must turn over their guns to police within 36 hours. We can envision how this law can be abused.

Gun Owners in Virginia must now report stolen firearms within 48 hours. If the gun owner doesn’t notify the police of a stolen gun within the first two days, they will face a civil penalty.

The Governor and the anti-gun politicians are not satisfied with the laws that they pushed through this year. They are going to try to strip us of more of our rights.

Don’t forget the so-called “assault weapons” ban which passed the House of Delegates and was sent to the Virginia Crime Commission for study by the Senate Judiciary Committee.  Gov. Northam still wants to pass this gun confiscation bill.

Gun Owners of America will continue to fight back against these unjust laws and fight to prevent even more Bloomberg back laws from getting passed.

Register to vote! The only way we can turn around everything that’s happened this year is by getting more pro-gun voters to the polls. So make sure that you’re registered, and that your pro-gun family and friends are, as well. Click here to register to vote in your state.