Don’t let up, keep up the pressure against the gun ban

Urge Your Delegate and Senator to Oppose the Northam-Levine Gun Ban! 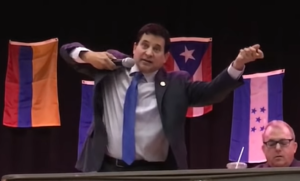 Del. Mark Levine (D) shows that “how you hold the gun” is what supposedly determines whether a gun is an “assault weapon” or a hunting rifle.

While it was atrocious and unconstitutional, the 1994 federal law:

The Northam-Levine bill does all those objectionable things, yet Delegate Levine claims it is “the same” as the federal “Assault Weapons” bill, which is a bald-faced lie.

These are the kind of fantasy facts Richmond Democrats regularly dish out to the public!  The Democrats hope the public will be kept in the dark and the media helps to ensure that.

Please contact your state delegate and senator (above) using the pre-written email we have prepared for you to send.

Delegate Levine, the chief legislative sponsor of the “assault weapons” ban, made a fool of himself at a Town Hall recently. He was caught on video claiming that the difference between a hunting rifle and an assault weapon is “how you hold the gun. It makes it a semi-automatic.”

As reported by the Washington Examiner, Del. Levine then showed his trigger finger moving, and added, “Meaning you can shoot with each finger, not like a bolt-action” rifle typically used in hunting.

You’ll laugh hysterically when viewing the video of Levine here — and you can also read the comments that I contributed to the accompanying article.

Also at the Town Hall, Del. Levine pretended his bill did not involve confiscation but simply required a “permit” and payment of $50 for each “assault weapon” kept so that “we know where they are if they are used by criminals.”

But, of course, Delegate Levine offered no evidence that his bill would stop crime. In fact, while gun owner registration has repeatedly failed to reduce crime, it has always been successful in helping tyrants to confiscate firearms. Not only in faraway foreign lands, but in U.S. states like New York.

That’s why I need you to inform your neighbors and family who support the Second Amendment with the real facts and to challenge legislators who try to pull the wool over the eyes of the public!

Please contact your delegate and senator (above) using the pre-written email and tell them to vote NO to HB 961.