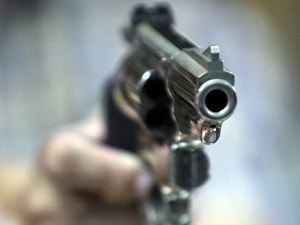 Two suspects broke into the home of a Korean War veteran on Friday and one them died on scene from a bullet wound to the chest.

The incident occurred in Ellport, Penssylvania.

According to the Washington Times, the Korean War veteran, 84-year-old Don Lutz, “woke up to the sound of strangers barreling their way into his kitchen.” Soon one of the suspects was upon him and Lutz had to fight. He managed to grab his Taurus .38 Special revolver and fire one round, which went into the suspect’s chest and came out his back.

Police were not able to recover the round and believe it may be stuck in the suspect who fled the scene.

Lutz told WPXI, “I ran into this guy. He grabbed me and the bullet went through his chest, went clean through him. The other guy must have been behind him.”