The Truth About Virginia Gun-Owners

Historic speeches were given by some of the country’s most notable 2ndAmendment Advocates including Erich Pratt, Senior Vice President of Gun Owners of America and Jan Morgan, National Director of 2A Women, among others. 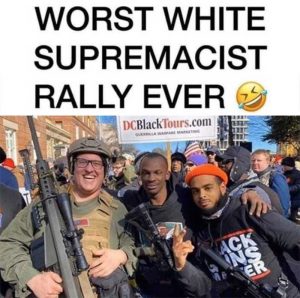 “10,000’s of armed white supremacists of all races, colors, genders, and creeds, descended on the Virginia state capital and attacked the garbage and litter on the capital lawn. No official reports have explained what became of the trash.” ~ Anon

Virginia gun owners made history on January 20th, 2020. In response to Governor Northam‘s unconstitutional and tyrannical gun laws, tens of thousands of gun owners from across the country descended on Virginia to remind governor Northam who he works for. Although the media desperately hyped the rally as a collection of dangerous terrorists and white supremacists, the truth is, the reporters, news outlets and some politicians showed their own racial bias, ignorance and their desperate attempt at creating a fake narrative.

A particularly shortsighted and ignorant comment came from Nupol Kiazolu – President, Black Lives Matter of Greater New York, when she said: “With the threat of gun-violence today from the armed militias out there. Um, I’d rather call them terrorists because that’s what they are to me.”

The truth is, the entire event consisting of approximately 25,000 to 50,000 armed Americans had no negative occurrences. There were no arrests or acts of violence, regardless of how hard the anti-gun crowd and left-wing ideologues wished for it to be so. As a matter of fact, as the event was winding down, gun-owners were caught on tape picking up trash in the streets. When was the last time you saw “terrorists” clean up after themselves?

Guns have no influence over the actions of people and there’s no such thing as “gun violence.” There’s only “human violence.” If someone believes in their mind that a gun could cause people to act violently, aren’t they the ones we should be concerned with? They are the ones who imagine reactive behavior with no self-control because of an inanimate object. This alone should alert everyone that those thinking such thoughts may be unable to function safely in society. Reactive and impulsive behavior should make everyone concerned and the anti-gun crowd reveals themselves when they use this type of language.