The regulation of owning and carrying firearms has been a hotly contested issue since Florida being founded as a US territory in 1821. Why was and is it such an issue? Simple. Chattel Slavery. 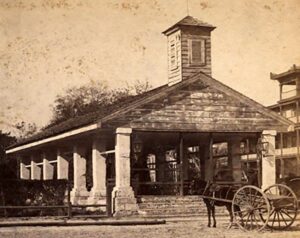 Florida was founded as a slave territory and its entire economy functioned through this barbaric practice. You can’t have a slave society if the very people you are putting in chains have access to arms. So, laws were put in place to create a system that would prevent their escape and ability to rise up against those that oppressed them.

Thus, the regulation and restriction on the carrying of firearms was created. With the Civil War resulting in the abolishment of slavery and the era of Reconstruction, it was believed that true equality would spread throughout Florida and that those now freed would be able to defend themselves from those that wished to enslave them again.

Alas, Reconstruction ended and the era of Jim Crow began. Lawmakers instituted new laws to strip and disarm Black citizens. The State Constitution was revised in 1885 and it stated the following regarding the ownership and bearing of arms.

The right of the people to bear arms in defense [sic] of themselves, and the lawful authority of the State, shall not be infringed, but the legislature may prescribe the manner in which they may be borne. – Article 1, Section 20, Florida State Constitution, 1885.

As a result, the Segregationists running the Florida Legislature passed a gun control law in 1893 and further revised it in 1901 and 1906—that prohibited the carrying of handguns and repeating rifles, openly or concealed, with ex­ceptions for peace officers and persons licensed by a county commissioner.

The entire system was a may issue process in which the licensing authority could on a whim deny the issuance of a permit to any one of their choosing. Black Floridians were unilaterally disarmed because of this law and were susceptible to violent attacks.

Such attacks were both on the individual level and coordinated. For example, the horrific Ocoee massacre where an affluent Black community in Orange County was utterly destroyed on November 2, 1920. What was so special about that day? It was election day and the goal was to keep Blacks from voting. The FBI showed up a few weeks later, not to investigate the murders or arson. But only to investigate the election fraud.

No one was ever prosecuted for the violence and loss of life.

There was also the Rosewood massacre in Levy County. Another affluent Black community that was burnt to the ground in 1923 under the false pretenses of rape.

Black Floridians had their homes and businesses destroyed along with their land stolen from them. No one of color lived in Cedar Key or Sumner because of what happened on that first week of January back in 1923. The State of Florida even stayed quiet about the whole ordeal until the late 1980s and didn’t officially apologize until 1994.

On the individual level, numerous Black Floridians were the target of racially motivated violence. One such instance is that of Rubin Stacy, a Black man in Fort Lauderdale who was lynched in 1935 after he was accused of assault and rape because he was Black. Instead of being tried by a jury of his peers in a court of law, Rubin Stacy was dragged from a Sheriff’s car and lynched in broad daylight.

Such cases of racial violence are sadly commonplace in Florida’s history. The lawmakers at the time had no issue with it and with the disarming of Florida’s minorities by enforcing laws that restricted the carrying of firearms. The bigots fully supported Jim Crow and knew that an armed Black population would never stand by and allow themselves to be treated as second-class citizens.

Justice Buford blew the issue wide open in 1941 when he wrote in the opinion of Watson v. State on the truth about Florida’s racist roots of gun control.

know something of the history of this legislation. The original Act of 1893 was passed when there was a great influx of Negro laborers in this state drawn here for the purpose of working in turpentine and lumber camps. The same condition existed when the act was amended in 1901 and the act was passed for the purpose of disarming the negro laborers and to thereby reduce the unlawful homicides that were prevalent in turpentine and saw-mill camps and to give the white citizens in sparsely settled areas a better feeling of security.

The statute was never intended to be applied to the white population and in practice has never been so applied. We have no statistics avail­able, but it is a safe guess that more than 80 percent of the white men living in rural sections of Florida have violated this statute. It is also a safe guess to say that not more than 5 percent of the men in Florida who own pistols and repeating rifles have ever applied to the Board of County Commissioners for a permit to have the same in their possession and there has never been, within my knowledge, any effort to enforce the provisions of this statute as to white people, because it has been generally conceded to be in contravention of the Constitution and non-enforceable if contested.

Justice Buford made it plain as day, the goal of the law was to prevent this.

Those running Florida wanted Jim Crow to stay in place and they knew that a Black population that was armed couldn’t be pushed around.

As time marched forward, Jim Crow started to lose its grasp on Florida during the 1960s with the rise of the Civil Rights Movement. Jim Crow’s last gasps were heard when the State’s Constitution was replaced in 1968. Though numerous changes were made in the name of equality, the abolishment of gun control wasn’t one of those changes.

The right of the people to keep and bear arms in defense of themselves and of the lawful authority of the state shall not be infringed, except that the manner of bearing arms may be regulated by law. – Article 1, Section 8, Florida State Constitution, 1968.

The bigots, racists, and segregationists were able to maintain their monopoly of the carrying of firearms. The people were still beholden to the authority of the state to legally exercise their Second Amendment rights.

Prior to the establishment of shall-issue laws, Florida was still the same system going all the way back to 1893. County governments and their lackeys were the ones who said yes and no on who had the legal ability to carry a firearm for self-protection. In 1987, one of the last pieces of Jim Crow were whittled down. Florida went from may issue to shall issue.

Although Florida has been shall issue in regards to a carry permit since 1987, it is finally time that the last remnant of Jim Crow be cast into the trashbin of history.

Florida must reclaim its title as the “Gunshine State.” The current hurdle facing Florida’s constitutional carry bill is the legislative dictatorship. Year after year, constitutional carry, open carry, and campus carry are blocked in committee under the authority and direction of the House Speakers and Senate Presidents.

Right now, HB 6001 is the current constitutional carry bill in the House and it is under the authority and order of Republican Rep. Chris Sprowls that this bill is to not be heard and passed from the House’s Criminal Justice Subcommittee.

There are currently over one hundred Republican lawmakers in the House and Senate and yet we can count on one hand the pro-gun bills that have been introduced this legislative session. That is utterly appalling. Worse though, Florida is under the political leadership of a party that campaigns as being pro Civil Rights and pro-Second Amendment. Yet it has been over a decade now that pro-gun bills constantly die in committee and never reach the governor’s desk.

Contact Governor DeSantis and your lawmakers to let them know that they need to support Constitutional Carry so Florida can finally shed one of the last vestiges of Jim Crow still on the books.