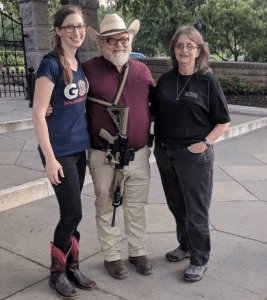 “Gun owners are done,” [Stephen] Willeford said, clutching the AR-15 semi-automatic rifle he used to take down the church gunman. “We don’t want any more restriction. It does not stop the bad guys.”

Gov. Greg Abbott on Thursday convened the first meeting of the newly formed Texas Safety Commission, ramping up the state’s efforts to devise policy solutions in the wake of the deadly shooting targeting immigrants and Hispanics earlier this month in El Paso.

For over four hours, the commission — which includes state leaders, lawmakers and law enforcement officials — met behind closed doors at the Capitol in what Abbott described as the “next step to make sure that we respond robustly and rapidly to the” El Paso attack.

Speaking with reporters at the end of the meeting, Abbott rattled off a long list of items that were discussed — stronger threat assessment efforts, better collaboration between social media companies and law enforcement, strengthening the state’s domestic terrorism law. He also broached more politically sensitive issues related to guns, saying there was discussion surrounding red flag laws — or at least an alternative to them — background checks and assault weapons.

“I think the conversation went in a lot of different directions,” state Rep. Joe Moody, D-El Paso, told reporters after the meeting. “Guns were discussed extensively — what we have under current law, what we can do under potential news laws. I think everything was on the table.”…

Before the safety commission meeting, Gun Owners of America, a hardline gun rights group, held a news conference outside the Capitol warning the commission against pursuing any proposals that would infringe on the Second Amendment. One of the speakers was Stephen Willeford, the hero in the 2017 Sutherland Springs church shooting.

“Gun owners are done,” Willeford said, clutching the AR-15 semi-automatic rifle he used to take down the church gunman. “We don’t want any more restriction. It does not stop the bad guys.”

Read more at The Texas Tribune