[Take Action] Tell the ATF to Not Regulate Bump Stocks 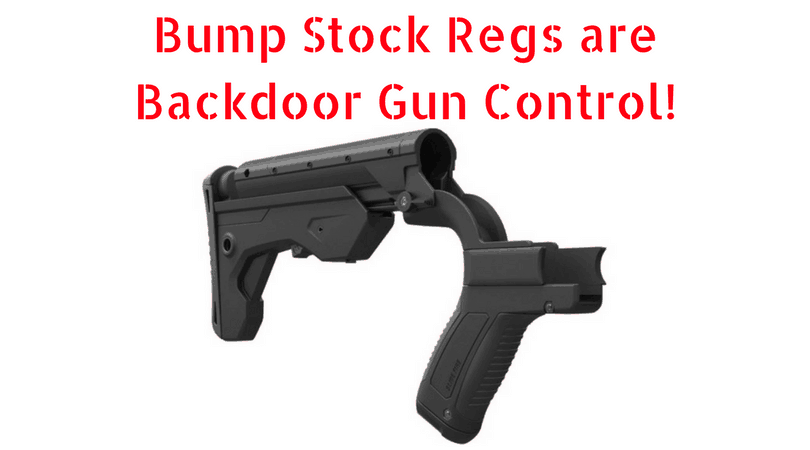 First and foremost, these proposed regulations will treat bump stock devices as machineguns, but they will also do much more.

These regulations also raise serious questions in regard to your AR-15s or other semi-automatic rifles — as they are now on the brink of being designated as machineguns by the next anti-gun administration.

So please comment on the regulations.gov comment page to tell the ATF to not regulate bump stocks. You may use GOA’s suggested text (italicized below) or your own comments, and you may access the comment page here.

I am opposed to any regulation on bump stocks.

These proposed regulations would declare a “bump stock” to be a machinegun because it allows the gun to fire more than one shot “by a single PULL of the trigger” — that is, by a single volitional function of the finger.

But federal law, at 26 U.S.C. 5845(b), defines a part as a “machinegun” ONLY if it is designed solely and exclusively to allow the gun to “fire more than one shot … by a single FUNCTION of the trigger.”

To state the obvious, a finger is not the same thing as a trigger. And, while a bump stock is in operation, the trigger functions separately every time a round is discharged.

So these regulations are proposing a radical change — as they effectively define a gun as a machinegun even if the trigger resets for every round that is fired, so long as the finger only pulls the trigger once.

While bump stock devices will now be treated as machineguns under these regulations, they also raise serious questions in regard to AR-15s and other semi-automatic rifles — as they are now on the brink of being designated as machineguns by the next anti-gun administration.

But now according to these regulations, a bump stock is a machinegun — and it can “readily restore” a semi-auto into a machinegun, simply because the gun owner can effectively fire the weapon continuously with a “single pull” of the trigger. This would invoke the statutory definition for a rifle, which is classified as a machinegun (26 USC 5845(b)).

It won’t matter that a gun which is being bump fired has not been fundamentally altered.  AR-15s will be on the brink of extinction once these regulations go into force.

These regulations dismiss Second Amendment protections, by appealing to the Heller court decision. But the Constitution trumps the Supreme Court — so when the Second Amendment says that the right to keep and bear arms “shall not be infringed,” any limitation of the right for law-abiding citizens should be treated as unconstitutional.

It’s because of the support of our members that GOA is able to spread the ideas of freedom in the Second Amendment. Join us in the fight for your gun rights.