For the last decade, the United States Supreme Court has abdicated its constitutional duty to resolve “cases and controversies” involving the Second Amendment. It has run from its historic duty, as articulated by Chief Justice John Marshall, “to say what the law is.” 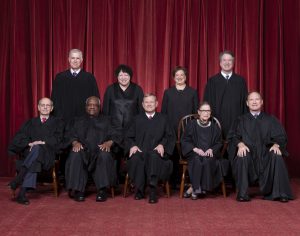 The High Court has stood on the sideline while the lower federal courts have allowed government at all levels to infringe the People’s right to keep and bear arms. It has watched silently while its seminal Second Amendment decisions in District of Columbia v. Heller (2008) and McDonald v. Chicago (2010) have been undermined by anti-gun district and circuit court judges. The Supreme Court’s neglect of its historic duty to protect the Second Amendment-protected rights of Americans has been nothing less than shameful. But in the last few weeks, it has gotten much worse.

It is time for a bit of introspection. Gun owners need to think through not just what has happened to us, but also how we need to change our strategy — leading us to read, ponder, and then pen three articles on this critical topic.

This first article explains the sad state of affairs at the Supreme Court at this time, and contrasts current losses with the great victories won in Heller and McDonald a decade ago. Part Two of this series will explain what happened over the decade between these great victories and the current series of defeats. We will show to the best of our ability how the position of the dissenting justices in Heller gained the ascendency over the Heller majority. And in Part Three, we will offer a plan so the gun movement can chart its course back to victory.

On April 27, 2020, in New York Rifle & Pistol v. New York City, Chief Justice Roberts joined the anti-gun, Democrat-appointed Justices on the Court to declare that New York politicians could manipulate the judiciary by enacting anti-gun laws, and then repealing them after years of litigation — just before it appeared they would be struck down by federal courts. Gun owners were shocked that the Supreme Court could declare the years-long litigation “moot” when everyone knew that New York was playing games with the Court, but the Chief Justice did not seem to have the will to use that opportunity to defend the Second Amendment.

But there was still hope. After all, there still were 10 pending petitions for certiorari in the U.S. Supreme Court. No doubt at least one of those cases would be a good vehicle for the pro-gun justices to re-affirm Justice Scalia’s decision in Heller and Justice Alito’s opinion in McDonald. But then, on one notable day, June 15, 2020, the Supreme Court denied certiorari review in all 10 pending petitions.

Could it be true that not one of these cases provided a good fact pattern to issue a helpful decision? Doubtful.

Supreme Court inaction is certainly not the worst thing that could happen.

As of today, there is only one gun case of note now pending on certiorari — Rodriguez v. City of San Jose, where GOA filed the only amicus brief supporting the petition on May 20, 2020. The Supreme Court ordered San Jose to file a reply to the petition — always a good sign — and we hope for the best, but there is no guarantee that Rodriguez will not go the way of the other 10 petitions. On June 17, 2020, the City of San Jose filed its opposition brief, and although San Jose took the unusual step of withholding consent to the filing of GOA’s amicus brief, San Jose addressed several of the arguments raised by our brief, referring to us as “proposed amici.”

The most likely reason that the High Court rejected all 10 cases was that there was one (or more) anti-gun Justice(s) among the five Republican-appointed judges on that Court who could not be trusted. (Who might that be?) If so, it would be better to wait for President Trump to get re-elected, and have one more Justice appointed to replace a Democrat, to assemble a majority of five pro-gun votes among six GOP justices, rather than allow Chief Justice Roberts (who upheld Obamacare) or Justice Gorsuch (who just rewrote the 1964 Civil Rights Act) to again side with the solid anti-gun Democratic bloc on the Court, the pro-gun justices would continue to bide their time.

Supreme Court inaction is certainly not the worst thing that could happen. President Trump’s appointments to the lower federal courts are turning some of the twelve federal circuits from anti-gun to pro-gun, and every month that passes, the turnover in lower court judges improves gun rights. And it certainly is true that a bad Second Amendment decision would be worse than inaction, as it would undermine — not strengthen — the power of the Supreme Court’s most recent guidance in Heller and McDonald.

One of the reasons that we thought that the Heller and McDonald decisions were landmarks is not just because the Supreme Court ruled that the Second Amendment protected an individual right, and that the Second Amendment applied to the states, but also because those decisions set out the method by which future gun cases were to be decided. This methodology issue is the critical issue facing us now.

Before Heller, the Second Amendment was the most significant constitutional provision without a long line of Supreme Court cases trying to explain its meaning. The justices knew that in Heller, they had the first case of any sort where they were unconstrained by precedent giving them a historic opportunity to get it right.

The amicus brief filed by Gun Owners of America took advantage of the moment, rejecting the application of commonly used “interest balancing” tests. We stated: “According to its text, context, and historic setting, the Second Amendment protects an individual right to private possession and use of handguns in one’s own home.” We argued, simply, that, “[w]hether the right to keep and bear arms is violated, then, must turn on whether the particular firearm regulations ‘infringes’ either the class of persons who, by nature, constitute the ‘people’ or the class of ‘arms’ appropriate to a ‘well regulated militia’.”

Justice Scalia’s opinion for the Court in Heller rejected the application of First Amendment jurisprudence to the Second Amendment.

However, others briefing the case fell back on what was familiar to them and argued Heller as though it were a First Amendment case, employing judge-made standards of review based on classifying rights as “fundamental” or not, “interest balancing,” and standards of review such as “strict scrutiny,” “intermediate scrutiny,” and “rational basis” analysis.

These other lawyers did not see the danger in arguing First Amendment tests should be applied in the Second Amendment arena. But, there is a fundamental difference. With the First Amendment, the government’s interests are often not substantial. However, with guns, the courts must weigh the government’s interest in public safety against the people’s right to arm themselves — a construct where public safety almost always wins.

Chief Justice Roberts rejected the use of First Amendment balancing tests during oral argument in Heller:

Well, these various phrases under the different standards that are proposed, “compelling interest,” “significant interest,” “narrowly tailored,” none of them appear in the Constitution; and I wonder why in this case we have to articulate an all-encompassing standard. Isn’t it enough to determine the scope of the existing right that the amendment refers to….

Consistent with Justice Robert’s observations, Justice Scalia’s opinion for the Court in Heller rejected the application of First Amendment jurisprudence to the Second Amendment. “There seems to us no doubt, on the basis of both text and history, that the Second Amendment conferred an individual right to keep and bear arms.” He rejected what he called “judge-empowering” interest balancing, as the Second Amendment itself “is the very product of an interest-balancing by the people.”

But after giving gun owners huge victories in Heller and McDonald, the Supreme Court has gone silent for a decade while the lower courts have used Justice Breyer’s “interest balancing” to give victory after victory to anti-gun state and local government lawyers. These lower court judges have tried to reduce the Heller victory to its facts — that no government entity can enact a complete ban on a handgun in the home — and nothing else.

As President Trump alters the composition of the lower federal courts, the trend is moving in the right direction, but how and why was the momentum lost after Heller and McDonald? That is the subject of Part II in this series of articles. And, in Part III, we will suggest a path forward to change our strategies in order to achieve victory in the Courts.

GOA And VCDL Challenge Virginia’s One Handgun A Month Law