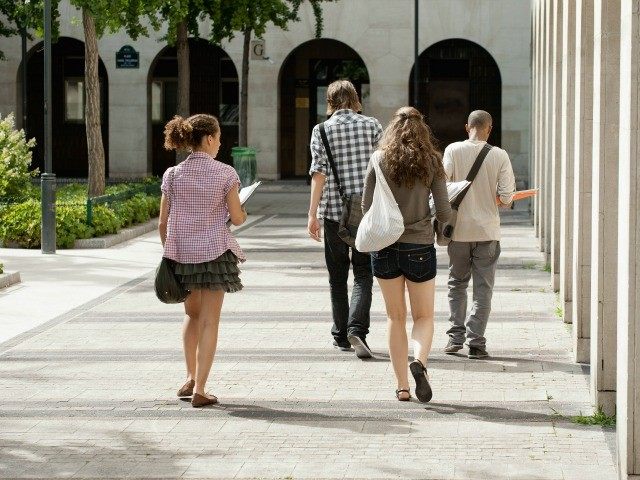 Schools are the proverbial barrel a mass shooter can shoot fish in. They’re contained spaces filled with disarmed individuals who often have been conditioned to stay and hide amid an attack. They’re kind of perfect for mass shooters.

Most schools have plans for such occasions, which mostly consist of locking down the school so the potential killer can’t gain access to more victims. This can work. In fact, it did in northern California recently.

But in colleges, things get a bit trickier. You see, adults tend to frown on people telling them they can’t leave for their own safety. Further, you often have a number of students who are old enough to carry a firearm legally…but only if their state allows it.

At UMass, student Brad Palumbo asks just why can’t he carry a firearm?

UMass students are prohibited from having a firearm (or even a BB gun) anywhere on campus, even in their dorm room; violating this rule can result in a fine up to $1,000 and/or imprisonment for up to a year. But this misguided state law, which deprives individuals of their constitutional rights, misses the point: Trained individuals with permits should be allowed to have guns on campus, and even carry them on their person, because everyone—including students—has the right to self-defense.

Well, it makes sense if you believe that we can’t have any mass shootings if our campus is a gun-free zone. But that logic falters when you look at the Chattanooga military base shooting or the infamous Batman movie-theater shooting––both of which happened in places that banned firearms.

It’s not hard to see why. Anyone serious enough to carry out a mass shooting won’t be stopped by a campus policy, a “no guns allowed” sign or any other measure the Commonwealth rolls out. If anything, a gun-free zone becomes a ripe target for a would-be gunman. Dylann Roof, who carried out a mass shooting at an African-American church in South Carolina, originally thought about killing individuals at the College of Charleston, but is believed to have changed his mind because the college had armed guards. Gun bans on campus only disarm law-abiding students, which aren’t the people we need to worry about. With this legislation, they’re left helpless.

The ‘good guy with a gun’ argument takes a beating in the media. But ask yourself: In the case of a school shooting, wouldn’t you wish that one of your classmates, who is trained and authorized to carry a firearm, was allowed to exercise their Second Amendment right and protect you both?

The ‘good guy with a gun’ trope isn’t just a right-wing talking-point pushed by the National Rifle Association. In the recent First Baptist Church shooting in Sutherland Springs, Texas, the gunman’s rampage (in which he used a gun that he should not have been allowed to legally purchase) only ended when a neighbor grabbed his rifle and returned fire. In September, a Tennessee church shooting was stopped when an armed usher confronted the attacker. When a criminal opened fire on a crowd in Chicago last April, he was stopped by a nearby Uber driver who had a permit to carry. There are countless examples, and they all show what happens when people aren’t helpless.

Polumbo is right to bring up these incidents, especially the Tennessee shooting that ended very differently than Sutherland Springs.

The “good guy with a gun” isn’t a trope, though. It’s an actual fact that can’t be overstated. These are real people that stop these attacks, not characters on a movie screen.