ACTION:  Contact your delegate and urge him to cosponsor and/or vote for House Bill 83.

And you know that Obama is ignoring Congress — essentially declaring himself Fuhrer — and has issued an illegal diktat to effectively ban most private transfers of firearms. 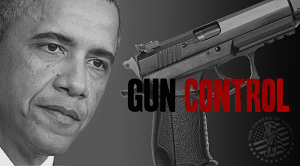 In particular, his lawless “executive” actions are aimed at coercing private sellers of firearms to require Brady Checks on their purchasers.

Of course, the Brady Law itself — by its clear language — deals only with transfers by a federal firearms licensee.

But no matter.  Obama and Harry Reid, using the fraudulent “nuclear option,” have just packed the federal courts with corrupt anti-gun judges.

And neither the law nor the Constitution is going to stop King Barack from doing whatever the heck he wants to do.

After all, Obama’s attitude, to paraphrase the French monarchy, is:  “I am the law.”

Fortunately, Virginia Delegate Bob Marshall (R-13) has introduced House Bill 83, which would prohibit Virginia officials from assisting Obama’s efforts to require illegal background checks for non-licensees who are exempted from those checks by federal statute.

Marshall’s legislation would also prohibit Virginia officials from enforcing any other Obama gun regulation promulgated after December 1 of last year.

Under the Supreme Court’s Printz case, Virginia is fully within its rights in refusing to be conscripted to the service of Obama’s regulatory scheme.  And, under the Constitution, it can do no less.

So please contact your delegate and urge him to cosponsor and/or support House Bill 83.