Your Activism has Made a Difference in Iowa

ACTION:  Please contact Senator Grassley.  Thank him for refusing to hold hearings on Obama’s anti-gun nominee — or taking any other action on what would be the “swing vote” to effectively repeal the Second Amendment.

Occasionally, the Senate floor proceedings can actually be entertaining.

And no more so than on Monday, when Judiciary Committee Chairman Chuck Grassley ambushed and humiliated the lying Senator Harry Reid. 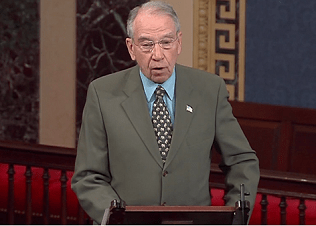 Reid was kicking off his campaign to force Senate consideration of an anti-gun Obama nominee to fill the seat vacated by Antonin Scalia.  There is no doubt that the anti-gun nominee would lie under oath before the Senate Judiciary Committee.

But, following confirmation, he or she would dutifully provide the deciding vote to repeal the Second Amendment, overturn the Heller case, and declare that the Second Amendment (as far as the corrupt courts were concerned) did not convey an individual right to Americans.

However, Grassley had an ace up his sleeve.

It turned out, in 1992, then-Judiciary Committee Chairman Joe Biden (yeah, THAT Joe Biden) had taken exactly the same position that Republicans are now taking with respect to a Supreme Court appointment by a “lame duck” president.

With George H. W. Bush in the White House, Biden had opined that the president should not seek to fill a Supreme Court vacancy during his final year.  Biden had stated that, if Bush did forward a nominee for the court, the Senate should refuse to hold hearings and deny the nominee a vote.

Biden had taken the position that the damage done by an eight-man court was insignificant compared to the damage which would ensue if Bush forwarded a nominee in that politically charged context.

In short, Biden took exactly the same position that Senate Republicans were taking now — in 2016.  And, so on the floor of the Senate, Grassley reminded Senators of what Joe Biden had said.

The atmosphere in the Senate chamber was electric.

Anti-gun Senators like Reid, Chuck Schumer, and Pat Leahy had planned to spend the afternoon throwing insults at gun owners.  But all of that changed in the face of Grassley’s withering attack.

Within 24 hours, Grassley circulated a letter, signed by all Republican members of the Senate Judiciary Committee, that there would be no hearings and no floor vote on Obama’s anti-gun nominee. Nothing.

Absent some extraordinary event, the anti-gun nomination is dead — and Barack Obama is through with his efforts to pollute the Supreme Court and American jurisprudence.   True, you don’t pop the champagne cork until the Senate adjourns sine die.

But Grassley has, on this occasion, given us a very valuable gift.  And he should be thanked for it.

Now, when Senator Grassley was, very publicly, making up his mind about what to do with Obama’s nominee, many of you wrote to him, urging him to spike it.

Grassley heard you loud and clear.

And now we need to thank Chuck Grassley for doing the right thing.

So please contact Senator Grassley again.  Thank him for refusing to hold hearings on Obama’s anti-gun nominee — or taking any other action on what would be the “swing vote” to effectively repeal the Second Amendment.