Written by Gun Owners of America Published: 06 May 2014

There is no dearth of talent to take on anti-gun loon Jeanne Shaheen in the New Hampshire Senate race this fall.

Both former U.S. Senator Bob Smith and conservative activist Karen Testerman are A-rated by GOA and are running in the Republican primary.

Many of you will remember then-Senator Bob Smith, who was the pro-gun hero who beat back the gun control push in 2000 — and gave rise to a succession of pro-gun victories over the next decade.

For those of you who don’t remember the mood in 2000, post-Columbine, it was grim.  Bill Clinton had announced a package of anti-gun legislation which included:  a statutory semi-auto import ban, a lock-up-your-safety provision, an effective ban on gun shows, and a provision to make it much more difficult to teach your kid the safe use of firearms without risking prison. 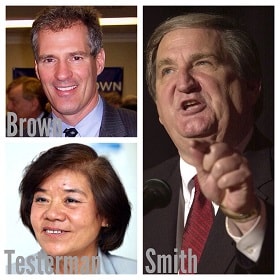 Even worse, another prominent gun group had endorsed a major part of this Clinton agenda, and its “gun control lite” passed the Senate with only two dissenting pro-gun votes:  Senator Mike Enzi of Wyoming and Senator Bob Smith of New Hampshire.

Working with Senator Bob Smith and Majority Whip Tom DeLay in the House, Gun Owners of America successfully forced the House to vote down “gun control lite.”  And, when Senate Republican Leader Trent Lott (R-MS) insisted on passing gun control as an amendment to another bill, Senator Bob Smith filibustered that. Combined with pressure on conference Chairman Orrin Hatch, Sen. Smith led the fight to kill all gun control.

Imagine what would have happened had Senator Smith and Congressman DeLay not stopped gun control:  One possibility is that a demoralized pro-gun movement — disgusted with both parties — could have stayed home in the 2000 elections and put Al Gore in the White House.  The least bad possibility is that senators would have concluded that the way to win elections was to pass 90% of the other side’s gun control agenda.

Instead, for a decade, senators were terrified to go against the “gun lobby.”  We passed armed pilots, limits on FEMA’s ability to seize guns in an “emergency,” and stopped a renewal of the semi-auto ban — all because we had shown strength in stopping gun control in 2000.

Either Smith or Testerman would be a positive gain for New Hampshire, as they are extremely pro-gun.

But then there’s the former Massachusetts Senator Scott Brown, who endorsed the semi-auto ban in the wake of Newtown:

Brown is also running in the Republican primary and seems to be the darling of the establishment in Washington.  But New Hampshire is more pro-gun than Massachusetts, and Brown has already confronted demonstrations of New Hampshire pro-gun groups.

The incumbent, Senator Jeanne Shaheen, is a far Left puppet of Barack Obama, a rabid supporter of gun control, and has been a reliable vote for Michael Bloomberg’s anti-gun agenda.

1. Thank Bob Smith and Karen Testerman for their long history of supporting the Constitution, and the Second Amendment in particular.

2. Tell Scott Brown that his anti-gun liberalism is not welcome in New Hampshire and that he needs to clean up his act.