GOA alerted you a couple of weeks ago to legislation in the Oregon legislature (SB 941) that would criminalize virtually every transfer of a firearm in the state, even if you are simply storing a firearm for a friend!

The only way to circumvent this ban would be to go to an FFL (prior to the transfer) to initiate a background (registration) check. 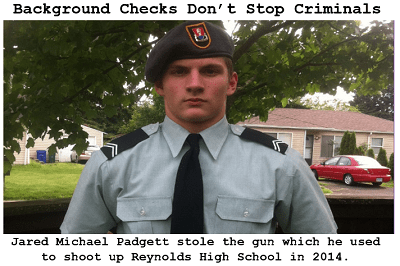 Sadly, the Oregon Senate passed SB 941 on Tuesday.  According to the state firearms group, Oregon Firearms Federation, here’s what happened on the Senate floor:

Republicans made numerous motions to act on bills that would actually have a positive effect on the lives of Oregonians…. [But] every Senate Democrats voted against every single motion….

In the course of the floor debate it became clear that the chief sponsor of the bill, Floyd Prozanski, either had no idea what was in his bill or was willing to openly lie about it. He answered numerous questions with answers that were patently false….

Senator Elisabeth Hayward, who has admitted to an inability to function without psychiatric medication, made a bizarre rambling speech about mental health and openly lied about current law saying that now, people who conduct background checks have no protection from liability if they transfer a gun. Of course, this is false….

When asked what would happen if a person wanted to store his guns in a friend’s safe (since this would be illegal under the bill) Prozanski said that maybe the local DA would just “choose not to prosecute.”

This bill now allows you to transfer a firearm to the spouse or gay lover of a family member if you KNOW the family member is a felon, but not to a heterosexual girlfriend or boyfriend you live with.

The battle now moves to the House.  Please take action and urge others to take action as well.  Also, you can go here to begin getting Oregon Firearms Federation’s state alerts.

ACTION: Urge your state Representative to OPPOSE SB 941 and get your pro-gun friends and relatives to take action, as well, by using GOA’s pre-written letter.

Home Invader Raped And Robbed Woman, Is Then Shot Dead By Precision Shot From Armed Neighbor