Constitutional Carry Passes Both Chambers of the State Legislature in West Virginia!

Last week, the West Virginia house, by a vote of 71-29, approved Senate Bill 347, the constitutional carry legislation.  (The Senate had already approved the bill by a vote of 32-2 back in February.) 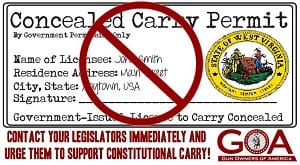 Under this bill, West Virginians will no longer be required to get the government’s permission to exercise their Second Amendment rights to carry a firearm to protect themselves and their families.

Most importantly, it’s now time to urge Governor Tomblin to support this bill.  Tell him that this bill has passed by a veto-proof majority in both chambers, so he should go ahead and stand up for gun owners’ rights by signing this bill into law.

ACTION: By using this link, you send Governor Tomblin a pre-written letter, urging him to sign SB 347.