The War Against Gun Ownership Resumes

Like a snake you can’t seem to eradicate, billionaire Michael Bloomberg has once again slinked into New Hampshire — attempting to use his billions to buy our freedom and our right to govern ourselves.

The bill, House Bill 650, would outlaw virtually all private firearms sales.  The corrupt and deceptive bill language pretends to allow a private transfer if there is no “advertisement, posting, listing, or display.”  But we all know what “display” will mean, once Bloomberg has “sprung the trap.”  If you take the gun in your hands and look at it, this will be regarded as a “display.” 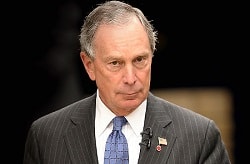 Thus, if you wanted to buy a gun from your lifetime neighbor, both of you would have to take off work, travel to a gun dealer, pay a substantial fee, and hope that the Brady system doesn’t unjustifiably block your transaction, as it does in one out of seventeen cases.  If that happens, prepare yourself for tens of thousands of dollars in legal fees, and, even with that, you’re probably never going to own a gun again.

All of this to bring New Hampshire into line with supposedly “crime-free” jurisdictions like New York, Connecticut, and California — all of which have been described, at one time or another, as “crime-filled rivers of blood.”

Of course, a major victim of Bloomberg’s zealotry would be law-abiding military veterans who have had their rights taken away just because they spoke with the Veterans Administration about their traumatic wartime experiences.  These veterans served their country well, but are now suffering from ailments like PTSD.  Having had their names submitted to NICS, these veterans fail the background check and are denied the right to purchase firearms at any gun store.

So here’s the problem:  If ALL private sales have to go through a dealer and background check, there will be thousands upon thousands of military veterans who will NOT be able to purchase a firearm … anywhere.

But this isn’t all:  Because the ATF is, illegally, copying 4473’s in connection with many routine annual inspections of gun dealers, anyone who has a 4473 would be in ATF’s national gun registry.  This means that under House Bill 650, there will be NO way for New Hampshire gun owners to escape being registered, practically speaking, since virtually EVERY gun sale will be recorded in gun dealers’ logs.

Finally, there’s this:  Former Mayors Against Illegal Guns minion Mark Glaze said on MSNBC that, the second they got their universal gun registry, his organization would be back the next day with new gun control demands:  Semi-auto bans.  Magazine bans.  Gun registration requirements prior to being able to purchase any gun.  Basically, all of the fascist nastiness that makes New York so unwelcoming to the Second Amendment community.

The bottom line is, as horrific as House Bill 650 is, it’s just the platform for a new round of gun control demands.

The Criminal Justice and Public Safety Committee will be hearing HB 650 on February 19 at 9AM (in Room 201 Legislative Office Building in Concord).  The committee will also be considering a good bill, HB 512, which would prohibit the confiscation of guns during a state of emergency.

ACTION:  Contact your state representative(s) and urge them to oppose House Bill 650, a bill that will outlaw virtually all private sales.  Also, ask your representative(s) to support HB 512, which would prohibit the confiscation of guns during a state of emergency.

By clicking on the link here, your representative(s) will be automatically selected and you can simply use the pre-written letter to help direct your comments.