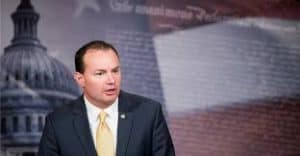 President Donald Trump’s nominee to lead the Bureau of Alcohol, Tobacco, Firearms and Explosives is facing stiff opposition from some Senate conservatives, leaving Chuck Canterbury’s confirmation in jeopardy after a Senate Judiciary Committee vote on the nomination was delayed last week.

Conn Carroll, a spokesman for Republican Sen. Mike Lee of Utah, told CNN in a statement that Lee has concerns about Canterbury’s nomination.

“Sen. Lee does have concerns about Canterbury’s Second Amendment views and is pleased his nomination has been delayed,” Carroll said…

Criticism within gun rights groups of Canterbury had been growing recently as his nomination and talks of a gun package progressed concurrently on Capitol Hill, though no significant gun control package has yet to substantially materialize this fall…

On Tuesday, Gun Owners of America, a hardline group known for aggressive lobbying on Second Amendment issues, urged its members to sign on to a petition against Canterbury.