President Trump’s Bureau of Alcohol, Tobacco, Firearms, and Explosives, in a move his own son has warned could alienate hardcore supporters, has taken the first step to regulate and tax one of the nation’s most popular weapons for plinkers and hunters, the AR pistol.

Without notice and citing unexplained concerns about “public safety,” the Justice Department’s ATF has ordered the maker of several popular AR pistols to “cease and desist” in the production of the top seller “Honey Badger.”

The order, which maker Q LLC complied with to avoid criminal prosecution, has jarred the gun community. 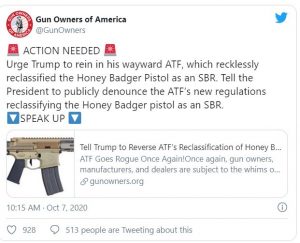 While only Q LLC has received a cease-and-desist letter, most AR makers also produce a version of the shorter-barreled Honey Badger pistol. And if all of those guns are reclassified to rifles by the ATF, 3 million to 4 million owners could become felons overnight, according to the industry group Gun Owners of America.

The ATF told Secrets that only New Hampshire-based Q LLC’s Honey Badger was the target. But, a spokeswoman added, “regarding other firearms or manufacturers, ATF cannot comment until we see the platform and what accessories may be attached to said platform.”

At issue is the National Firearms Act, a holdover from the Prohibition era and gangland machine gun shootings, and the modern AR pistol. Under the act, rifles with barrels shorter than 16 inches are designated “short-barreled rifles” and require a federal permit and a $200 tax. Permits can take months to get, making the weapons unpopular.