Written by BY MATTHEW VADUM, Epoch Times Published: 17 May 2021

The Supreme Court unanimously rejected Biden administration arguments in a case from Rhode Island that police should be allowed to enter homes without a warrant to seize handguns. 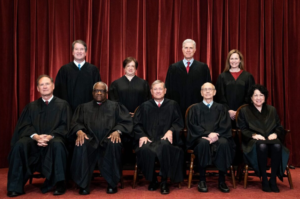 “The Supreme Court today smacked down the hopes of gun grabbers across the nation,” Pratt said.

“The Michael Bloombergs of the world would have loved to see the Supreme Court grant police the authority to confiscate firearms without a warrant. But the Supreme Court unanimously ruled that the Fourth Amendment protections in the Bill of Rights protect gun owners from such invasions into their homes.”

Bloomberg, the billionaire former New York mayor, is an activist and major funder of gun-control groups.

The case came before the high court for oral argument two months ago as President Joe Biden and congressional Democrats began pressing for aggressive new restrictions on Second Amendment gun ownership rights, including controversial “red flag” laws, which allow gun seizures from law-abiding gun owners with limited due process, in the wake of highly publicized deadly mass shootings in March at a Boulder, Colorado, supermarket and at Atlanta-area spas.

Police generally cannot conduct searches of private property without consent or a warrant.

In Cady v. Dombrowski the Supreme Court held in 1973 that police may conduct warrantless searches related to “community caretaking functions,” but only for “vehicle accidents.” Since then, the principle has become “a catchall for a wide range of responsibilities that police officers must discharge aside from their criminal enforcement activities,” the 1st Circuit Court of Appeals stated in the Caniglia case.

During telephonic oral arguments March 24, Department of Justice lawyer Morgan Ratner supported the city of Cranston’s position, arguing police have to be free to act in potential emergencies.

“Although there have been a lot of questions this morning about whether this is emergency aid or exigent circumstances or community caretaking or something else, the label you give it is not nearly as important as the principle. And the key principle is if someone is at risk of serious harm and it’s reasonable for officials to intervene now, that is enough,” Ratner said.

“The question today is whether Cady’s acknowledgment of these ‘caretaking’ duties creates a standalone doctrine that justifies warrantless searches and seizures in the home,” Thomas wrote.

At the same time, he noted that the case implicates “another body of law that petitioner glossed over: the so-called ‘red flag’ laws that some States are now enacting.”

Such laws, he wrote, “enable the police to seize guns pursuant to a court order to prevent their use for suicide or the infliction of harm on innocent persons.”

Although this particular decision does not address those issues, “provisions of red flag laws may be challenged under the Fourth Amendment, and those cases may come before us.”