The Bureau of Alcohol, Tobacco, Firearms, and Explosives (BATF) has sent a cease and desist letter to Q, LLC, over their Honey Badger pistol.

The Honey Badger is an AR15 pistol with a pistol brace licensed and produced by SB Tactical. In the letter, the ATF considers the Honey Badger as a short-barreled rifle (SBR). SBRs are controlled under the National Firearms Act and require a $200 tax stamp and added paperwork. Owning an unregistered SBR is considered a felony with a lengthy prison term. 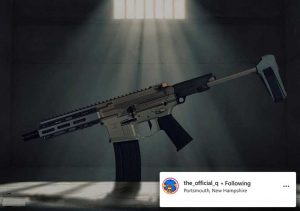 The notion of the ATF reclassifying the Honey Badger an SBR has sent shockwaves through the gun community. The questioning of the legality of pistol braces has rocked firearms news sites. People begin to worry if a Bump Stock Ban 2.0 was going to happen all over again.

The ATF reclassified bump stocks as machine guns after a shooting in Las Vegas. After years of being on the market and approval by the ATF, the agency told people that they had to turn in their bump stocks or destroy them. The ATF put several companies out of business with their arbitrary ruling.

This case is different. Nine months ago, The Depart of Justice (DOJ) instructed the ATF’s industry side not to move on braces until all parties could agree on standards. Unlike bump stocks, multiple companies have sold millions of braces to Americans, and the industry was working with the ATF to develop the new regulations.

Since the ATF could not use their industry side to go after Q because of DOJ limitations, the agency decided to use its criminal arm to send a Cease & Desist Letter and accuse the company of selling unregistered SBRs. Sources inside the ATF tell AmmoLand that the investigation and subsequent letter was a result of how Q marketed the Honey Badger. After trying to resolve the issue with ATF, Q went public with a letter to their customers advising them of the ongoing situation and the legal jeopardy.