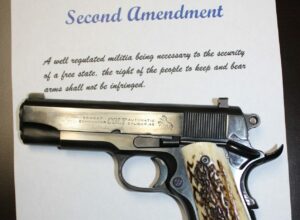 Rep. Marjorie Taylor Greene has introduced the Second Amendment Preservation Act which is a bill that would prevent federal funds from being used to enforce any measure, law, regulation, or guidance from the Bureau of Alcohol, Tobacco, Firearms, and Explosives (ATF) issued after November 1, 2020.

After the Presidential election, the Biden transition team contacted the ATF to see what their top priorities will be for the new administration. Acting ATF Director Regina Lombardo and Acting Assistant Director Marvin Richardson responded that their top priorities were pistol braces and unserialized firearms. As soon as it appeared that Biden won the election, the ATF started tackling their biggest concerns.

The ATF raided Polymer80 and started showing up at firearms dealers that sold unfinished frames. They radically changed what they considered firearms after the Biden victory. According to the agency, a kit with a jig and a frame was enough to consider it a gun. The ATF believed anyone selling the kits was selling unregistered firearms. Biden’s win emboldened the ATF.

Then right before Christmas, the ATF submitted a letter to the National Registry, which would make almost every pistol brace on the market into a stock. They were about to turn millions of Americans into felons overnight. Only because of the massive public outcry and enraged Congress members did the ATF pull their letter. No one believes that the ATF will stop trying to change the definition of pistol braces and unfinished frames.

What Rep. Greene’s bill will do is stop the ATF in their tracks. Without funding, they will not be able to enforce changes to long-held definitions of devices as they did with bump stocks to make de facto gun laws. Rep. Green believes only Congress can make laws, and the law enforcement agency has overstepped its bounds.

The bill has won praise from firearms advocacy organizations like Gun Owners of America (GOA). The group endorsed Rep Greene during her campaign, citing her commitment to defending the Second Amendment. Greene is a gun owner and a staunch supporter of the right to bear arms.

President Biden has promised to take on gun owners and pursue the most aggressive gun control agenda in history,” Aidan Johnston, Director of Federal Affairs for GOA, stated. “He’s vowed to attack the gun rights of seniors, ban the distribution of 3D printed gun files, and target pistol braced firearms and 80 percent receivers. However, the Second Amendment Preservation Act cuts at the heart of the enforcement of any legislation by any agency—through cutting its funding—and prevents any of Biden’s measures from going into effect.

This legislation harmonizes with the clear mandate of ‘shall not be infringed’ in the Second Amendment and gives gun owners a tool to peaceably fight back against unconstitutional gun control measures, Johnston concluded.

Encourage Governor DeSantis to Use His “Bully Pulpit” for Gun Rights