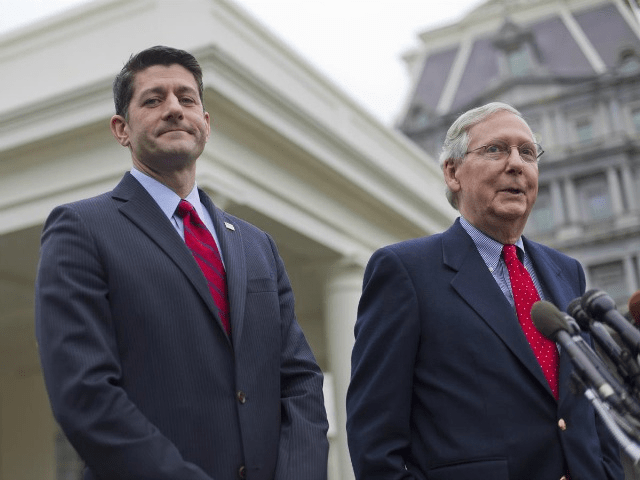 “Gun Owners of America (GOA) is urging the House to repeal a gun control amendment originally added to legislation by then-Rep. Chuck Schumer in the late 1980s.”

When the House and Senate both voted to repeal the Social Security gun ban in February, Americans got the impression that we finally had legislators who were going to be proactive on the Second Amendment, who would seize the opportunity of having a pro-gun president, and pass bill after bill to bolster the exercise of Second Amendment rights.

However, everything stalled as both the House and Senate appear to have largely embraced a return to status quo on gun rights.

What follows are five pro-gun moves that Senate Majority Leader Mitch McConnell (R-KY) and House Speaker Paul Ryan (R-Wisc.) could be making right now, but are not.

Hearing Protection Act–The Hearing Protection Act is firearm deregulation legislation which emphasizes the health benefits of suppressors. The Act has medical doctors on its side, while Gabby Giffords and other gun controllers push ear plugs and ear muffs as sufficient hearing protection. Doctors for Responsible Gun Ownership (DRGO) explain:

Hearing protection in the form of ear plugs or ear muffs, alone or in combination, can only reduce noise exposure by approximately 20-30 decibels. This limitation in noise reduction may still expose a firearms user to damaging levels of noise; 120 decibels is still louder than a car horn from three feet away. Thus, inside the canal and over the ear devices (i.e., ear plugs and ear muffs)—the only current generally available protection—are inadequate for impulse noise protection, and when used together they deafen the wearer to all external sound.

At the same time, DRGO stresses that “suppressors offered significantly greater noise reduction than ear-level protection, usually greater than 50% better.” The Hearing Protection Act removes the cumbersome process which law-abiding citizens currently have to go through to acquire a suppressor, thus making the hearing benefits of the devices readily accessible.

The Hearing Protection Act was introduced by Representatives Jeff Duncan (R-SC-3) and John Carter (R-TX-31) on January 9, yet it sits. Donald Trump Jr. has made clear that his father–our President–would sign suppressor deregulation should it reach his desk.

Repeal of Gun Ban for Military Veterans–The gun ban for military veterans is structured almost identically to the Social Security gun ban which the House and Senate both voted to repeal in February, and which President Trump signed on February 28. The gun ban for military veterans opens the door for veterans receiving disability benefits to be investigated if their benefit check is sent to a third party to help manage finances. The premise behind launching an investigation is the presupposition that those who require help managing finances may be mentally unfit for gun ownership.

On March 16, 2017, Breitbart News reported that the House voted to repeal this ban via the passage of the Veterans 2nd Amendment Protection Act, sponsored by House Committee on Veteran Affairs chairman Phil Roe (R-Tenn.). We are waiting for the Senate to follow suit so military veterans can know their Second Amendment rights are shielded like those of Social Security beneficiaries.

Repeal of Chuck Schumer gun control–Gun Owners of America (GOA) is urging the House to repeal a gun control amendment originally added to legislation by then-Rep. Chuck Schumer in the late 1980s. The amendment makes it harder for persons previously subject to a gun ban to regain their constitutional rights after paying their debt to society. GOA’s Erich Pratt said, “It is important for Congress to repeal the Schumer ban immediately.  Too many good Americans are being prevented from exercising their Second Amendment rights.  We hope that Rep. John Culberson (R-TX-7) will single-handedly remove the Schumer ban from his Commerce-Justice-State appropriations bill.”

Pass Legislation to End Operation Chock Point–Operation Chock Point was used by the Obama administration to drive a wedge between financial institutions and firearm/ammunition makers and sellers. The practical outworking of the operation was simply another avenue for the left’s war on the Second Amendment. For example, on January 14, 2015, Breitbart News reported that Mike Schuetz, owner of Hawkins Guns–in Hawkins, Wisconsin–ran his business accounts through Heritage Credit Union until said credit union called him in for a meeting and told him to close his account because “they do not service businesses that deal in guns.” Schuetz said, “This is just a back door way for those wanting to infringe on your rights to keep and bear arms and is nothing more than discrimination to gun owners.”

A story similar to Schuetz’s was told by Scottsdale, Arizona, company American Spirit Arms, and the Washington Times reported on gun stores in Miami, Florida, and Henderson, Nevada, that faced a similar struggle.

Rep. Blaine Luetkemeyer (R-MO-03) has introduced legislation to make sure Operation Choke Point cannot be revived by rogue operators in the Department of Justice while Trump is in office.

Last Congress, the House of Representatives took the first step in putting an end, once and for all, to Operation Choke Point by passing my legislation. Although there is a new Administration and Department of Justice in place, this legislation is necessary to ensure that no future Administration will have the opportunity to negatively impact individuals and legal businesses through this unprecedented initiative. We must continue to demand greater transparency and end the practice of allowing government bureaucrats to use personal and political motivations to block financial services to licensed, legally-operating businesses.

American gun owners voted for a pro-gun House and Senate to create a situation where a GOP trifecta–House, Senate, White House–could repeal gun control and pass pro-Second Amendment legislation that will positively impact American life for decades to come. It is time for McConnell and Ryan to act by passing these measures and repealing others, where apropos.

What they are saying about Gun Owners of America