Prepare to be Enraged …

This will make your blood BOIL. 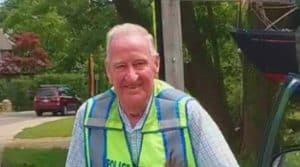 Stephen Nichols, an 84-year-old American veteran in Massachusetts, had his guns CONFISCATED by a police officer all because a waitress misheard a private conversation he was having with a friend.

There was NO DUE PROCESS and NO WARNING. A police officer showed up at his doorstep demanding he fork over his lawfully owned firearms and license that he had had since 1958!

THIS is America’s future if Red Flag Gun Laws are instituted. The bad guys won’t lose their guns. Decent and honest Americans like YOU will.

We have to keep fighting to pressure EVERY Senator to strike down these vicious gun grabs. We need to get Senators ON PUBLIC RECORD stating whether they would let an American hero like Stephen Nichols be stripped of his 2A rights.

Gun Owners of America is working to defeat candidates who support Red Flag Gun Grabs. But after this DESPICABLE story, it’s time to turn up the heat.

Please make a contribution to our 2A Protection Fund to defeat Red Flag Gun Laws before they destroy our nation.

He expressed this concern to his friend at a restaurant, stating that without the school resources officer on site, someone could come and “shoot up the school.”

A waitress eavesdropping on the conversation only heard the words “shoot up the school” and reported this innocent American hero to the police.

…And just like under Red Flag Gun Laws, this man was NEVER given the chance to defend himself.

This is why a recent poll conducted by GOA shows that 78% of gun owners consider themselves single-issue voters.

Because gun grabs don’t just destroy our Second Amendment. In the end, they destroy all of our freedoms.

So please, make a contribution to our 2A Protection Fund to defeat Red Flag Gun Laws before they destroy our nation.