The calls for more gun control are in full swing.

Following the Virginia Beach mass shooting last Friday, Democrat presidential hopefuls are lining up to restrict the rights of honest Americans and to shred the Second Amendment.

The comments from socialist Bernie Sanders are typical. In the aftermath of the shooting, he blasted the gun lobby for “controlling Congress” and called for more “gun safety legislation” as the panacea for every societal ill. Virginia Gov. Ralph Northam followed with his own calls for specific gun restrictions.

But in the midst of all the hyperbole, there was one inadvertent admission. The chief of police in Virginia Beach — a gun control advocate himself — admitted that additional gun control would not have made a difference. 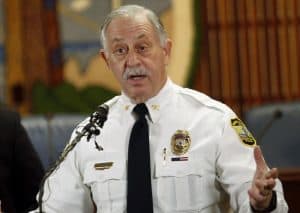 Here’s why Chief James Cervera is right on this point.

1) Gun-free zones are a failure. A key premise to the gun control view is that Americans would be safer if guns were banned at various locations. Hence, we see gun-free zones have been imposed at every school in the country, in government buildings, at sporting events, etc.

But this won’t make Americans safe. Case in point: the Virginia Beach shooting effectively occurred in a gun-free zone. City employees are prohibited from carrying firearms, so they were sitting ducks when the killer chose them as the targets. This shooting is not an isolated incident, as almost 98 percent of the mass shootings that occur in this country occur in gun-free zones.

2) Universal Background Checks proven totally ineffective. The anti-gun left incessantly argues for running every gun purchase through a background check. But they ignore the fact that 95 percent of initial denials are false positives, stopping people who are not really criminals.

3) Banning AR-15 style firearms misses the mark. Those who hold an irrational fear of firearms are relentless in their calls for banning commonly-owned firearms like the AR-15. But here again, a ban on these guns would have done no good. The Virginia Beach killer used two handguns, which by the way, is the weapon-of-choice for mass shooters — not the AR-15.

4) Suppressors don’t allow “stealth” killing. Anti-gun zealots have seized on the fact that the killer used a suppressor, as justification for banning these items. Yet suppressors are simply a safety device to protect people’s hearing. They are more like a car muffler, rather than the Hollywood notion of a “silencer.”

Suppressors don’t reduce the sound to a whisper as so deceptively portrayed in so many movies. Not surprisingly, witnesses in Virginia Beach reported that they “heard” the gunshots, which is a clear indication that the myth of the silencer is just that — a myth.

5) Limiting magazine capacity becomes harmful to the innocent. Finally, the left would have us believe that if standard-to-large capacity magazines were banned, this killer would have been unable to find magazines larger than five or 10 rounds.

But to believe that, one would have to believe that Prohibition effectively kept people from drinking booze and that the War on Drugs was equally successful.

The truth is that limiting magazine capacity will endanger law-abiding Americans. Consider recent examples of self-defense where Americans needed weapons with so-called “hi-capacity” magazines to protect themselves.

When he heard the clicking sound, he turned and savagely beat her. The homeowner survived, but she has promised to buy a new gun — one with a good-sized magazine. Good thing, because she needs it.

To hear anti-gunners like Sanders and Northam speak, one would think that the United States is the world leader when it comes to mass shootings. The truth is that our country is near the bottom of the list — placing 64th (in per capita frequency) in a list of 97 countries that have had mass shootings.

And what about the worst 63 nations? They all have stricter gun control than the United States, which just goes to show that gun control is a huge failure — not just here, but around the globe, as well.