PA: GOA Steps in to Stop Philadelphia’s Continuing 2A Infringements

The Philadelphia Gun Permit Unit (GPU) is at it again, creating illegal signs that violate your constitutionally-protected rights. One of our GOA members reported seeing this completely illegal sign posted at the GPU.

When I saw it, I was furious! So, I had GOA’s attorney, Andrew Austin, swing into action immediately to force the GPU to remove it. 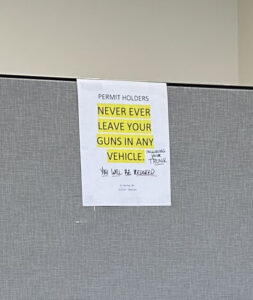 It’s crazy to claim you’ll take someone’s permit from them for safely storing their firearm in a locked vehicle. Whether we believe it’s constitutional or not, a person can’t go into some places–like the post office–with a firearm. People need to be able to go about their daily lives without worrying that they could violate state or federal law and lose their LTCF.

Andrew Austin stated “Pennsylvania law is very clear on the reasons why a person’s permit can be revoked. Leaving a gun in your car isn’t one of them.”

It’s unfortunate that GOA needs to keep reminding Philadelphia that they aren’t allowed to make up their own rules but must follow state law.

Philadelphia needs to understand that GOA is committed to protecting the God-given rights of all Pennsylvanians as the only ‘no compromise’ gun rights organization and that our members will not tolerate their flagrant violations of state law.

Since 2020, GOA has initiated three lawsuits against the City of Philadelphia for its failure to comply with state law pertaining to LTCFs. In every instance, the City has been forced to change its practices and procedures in response to GOA’s lawsuits.

There’s no doubt in my mind that GOA’s previous actions against the City led to its immediate compliance by removing the illegal sign.

I want to personally thank the member who brought this problem to GOA’s attention.

Stay tuned for more information about the upcoming legislative session in Harrisburg.