Stop trying to impose your anti-gun decisions on me!

All over the country, the media have run front-page articles about Richard Martinez, the father of Christopher Michaels-Martinez, who was killed by 22-year old nutcase Elliot Rodger.

While I am very sorry for the pain inflicted on the Martinez family and all the families of those harmed and killed by Elliot Rodger, Mr. Martinez’ statements deserve a response.

For starters, he portrays himself as some kind of expert because he actually shot a few birds on the family farm when he was a kid and was in the military — so he should know exactly what to do to solve the “gun” problem in America. 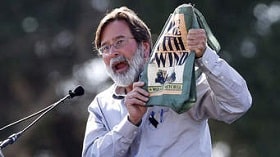 “I understand this is a complicated problem. I have friends who are in the NRA. I grew up on a farm. I hunted. I killed animals. I understand guns,” Martinez said. “But assault rifles and semi-automatic weapons? There is no need for those except for war.”

There is “no need” for these guns?  Really?  In a tiny blurb on page 4 of one newspaper that carried Mr. Martinez’ statements above, there’s a headline that says, “Resident Kills 1, wounds 1 in gunfight with intruders.”

The article goes on to say that a Tulare County, California man was asleep in his home when he heard a door in the house being kicked in by three or four intruders. He took his siblings, ages 8-18, to another room in the house, grabbed a gun, and the shooting started. As stated above, he killed one bad guy and wounded another, while the police are looking for one or two more who fled the house. The 22-year old man, who probably saved the lives of his brothers and sisters, was also shot by the bad guys, but police say he is expected to survive.

So Mr. Martinez . . . can you explain to me how this brave young man would have survived the attack of three or four gun-toting criminals and saved the lives of his family if he was not “allowed” to own a semi-automatic weapon?

If you or anyone else doesn’t want to own the means of self-defense, especially in the face of multiple criminals out to murder or injure you or your family, that is your decision. But STOP trying to impose your dumb decisions on the rest of us.

Next, Mr. Martinez demanded something be done: “I’m angry with the leadership of the NRA who always want to characterize this as if it’s a lone madman. That it’s an act of nature we have to tolerate. I’m angered by how they have worked to normalize this.”

So Mr. Martinez, you have decided to blame an inanimate object and the NRA and not the “lone madman.”

Hate to bring it to your attention, but the “lone madman” stabbed and killed people with a knife, ran them over with a car and shot them with a gun. None of these things could happen without the single main influencing factor — the “lone madman.”

Mr. Martinez, the liberal media and hard-left politicians will call for more gun control laws, even though California is considered one of the most gun-controlled — if not THE most gun-controlled — state in the nation. So how exactly did all these laws against law-abiding citizens stop this loss of life?

The fact is that time and again it has been proven that a gun-owning society is a safer society, and that guns save many, many more lives every day of law-abiding citizens than they harm.

Again, I say to Mr. Martinez . . . if you don’t want the means to defend yourself, your home and family, don’t buy it. But PLEASE quit trying to impose your bad decisions on me and my family and all of America.

Tim Macy is Vice Chairman of Gun Owners of America, a national grassroots gun lobby with over 500,000 members.