Mayors Against Illegal Guns Has Its Share Of ‘Illegal’ Mayors : Personal Liberty

The New York Post recently pointed out an interesting fact about Mayors Against Illegal Guns (MAIG), the gun control project started by outgoing New York Mayor Michael  Bloomberg and Boston Mayor Thomas Menino: Some of its members haven’t fared so well in staying on the right side of all the other laws they’re sworn, as mayors, to uphold. 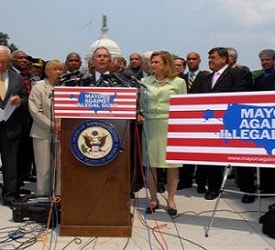 From DUIs to misdemeanor endangerment charges (involving guns) to plea deals for Federal bribery indictments, the mayors of MAIG don’t always do their part to preserve the group’s squeaky-clean public reputation.

“The latest of the legally challenged is Mayor Gordon Jenkins of Monticello, NY. Last week, he was arrested for driving under the influence and for literally punching a police department clock, which forced cops to handcuff him to a chair.

He’s not alone. Over in Spring Valley, Mayor Noramie Jasmin was arrested for accepting bribes from an FBI informant in April. In Marcus Hook, Pa., Mayor James Schiliro was arrested for reckless endangerment after firing a handgun inside his home during a drunken argument.

Down in Gainesville, Fla., Mayor Craig Lowe was charged with a DUI after being found asleep at the scene of a car accident. Meanwhile, other MAIG members from Hartford to Detroit have found themselves facing prosecutors over charges that include felony corruption, assault and attempted sex crimes with a child.“

In order, those last three include:

Assault: Former Detroit Mayor Kwame Kilpatrick pleaded no contest to assaulting or obstructing a public officer in 2008 as part of a larger plea deal that also saw him resign from office and plead guilty to two counts of obstruction of justice.

Attempted Sex Crimes With A Child: In 2010, former Racine, Wis., Mayor Gary Becker got three years in prison following a sensational scandal in which he was arrested after agreeing on the Internet to meet a child for sex at a Milwaukee mall. Becker was charged with attempted second-degree sexual assault of a child under 16 years of age, possession of child pornography, child enticement, use of a computer to facilitate a child sex crime, attempt to expose a child to harmful material and misconduct in office.