The fight is not over yet!

— The battle continues, and now moves to the Senate

“There is opposition to changing existing law from conservative lawmakers and gun rights groups such as Gun Owners of America.” — USA Today, December 3, 2013

Straight from bumbling the shut down, the House leadership yesterday, by a voice vote, slammed through a straight ten-year reauthorization of the poorly drafted 1988 plastic gun ban.

Read GOA’s oped on this subject in this morning’s USA Today.

At least, argue House Republicans, this “straight authorization” of a bad law will prohibit New York Democrat Chuck Schumer from using the reauthorization as a vehicle to enact new, more extensive gun control. 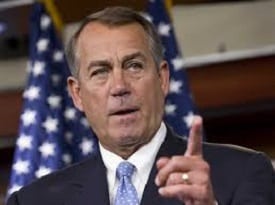 But the House leadership has now handed Schumer a legislative vehicle for passing his gun control.  This means he and Harry Reid could choose to take their ban on 3-D printer guns -– which, by the way, would also ban many metal gun manufacturers -– and send it back to the House.

Just hours after the House reauthorized the anti-gun law, Schumer held a press event in support of expanding the plastic gun ban.

If they do this, then Boehner and his leadership team will once again be swimming in a river of pain –- inflicted by a liberal media that finally sees an opportunity for passing its much-desired gun control agenda.

So the first thing we’re doing is to organize a Senate filibuster of any Schumer effort to pass and/or expand the House bill.

Given that the Senate is currently bogged down in a fight over the defense authorization legislation, we may be able to make it very difficult for Schumer to use the House-passed bill as a vehicle for new gun control.

So please stay tuned.  We thank you for all your activism up to this point.  But just realize that this battle is not over yet.

GOA IN THE MEDIA

Among other things, Pratt argued that the plastic gun ban is an unconstitutional infringement of our liberties that is not only ineffective, but could eventually be expanded by an anti-gun administration to ban even more guns.

But what about the issue of smuggling guns onto planes?

Pratt says that renewing a ban on plastic firearms will “not stop criminals from making them or stealing them,” any more than Chicago’s gun restrictions have been effective in stopping shootings there.

Bottom line, says Pratt, Congress solved the problem of terrorists carrying weapons onto planes after 9/11 — not through additional gun bans, but by “allowing pilots to use guns to defend themselves and their passengers.”

Again, you can read the entire column here.

Mayors Against Illegal Guns Has Its Share Of ‘Illegal’ Mayors : Personal Liberty