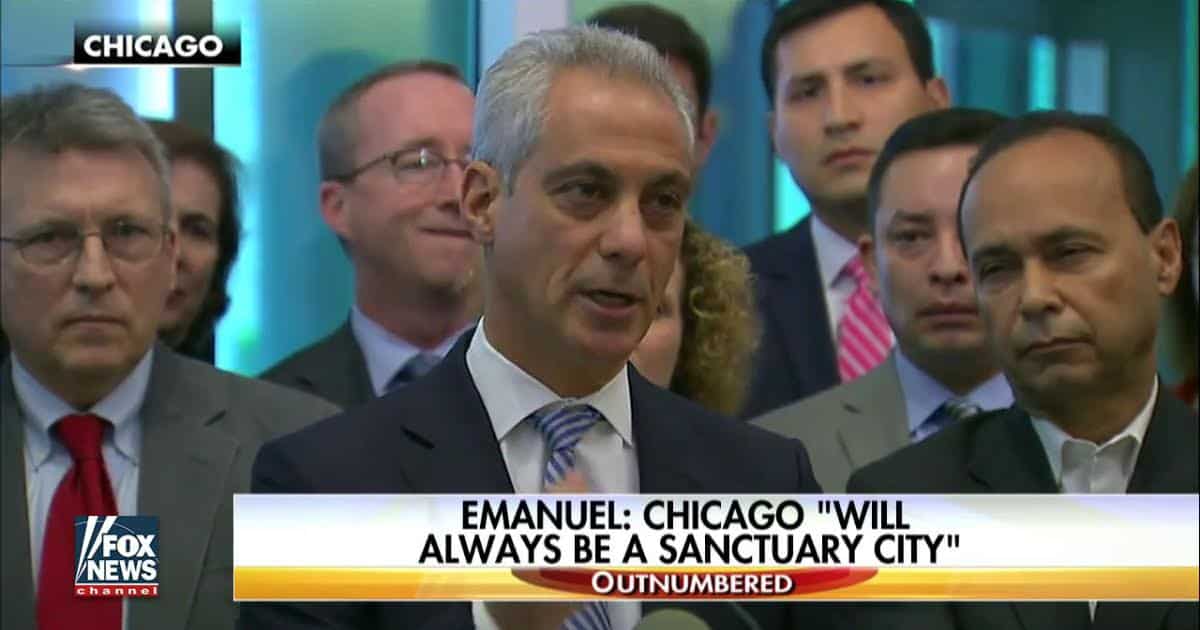 This November the city of Chicago racked up its 700th murder with well over 600 of them killed by gunfire. And yet, Chicago’s Mayor, former Obama chief of staff Rahm Emanuel, held a big press conference to insist that his city will remain a law-breaking “sanctuary city” and that illegals will be “safe” there.

Chicago is infamous as the city in the U.S. least friendly to the Constitution and its citizens’ Second Amendment rights. But despite the strict, anti-gun rules sponsored by the city council and backed by the state legislature, between January one and November 14 there have been 3,871 shootings. Of that number nearly 700 were shot and killed.

In August of this year the city suffered its deadliest month in 20 years with 472 shootings in just that one month alone. That number included 90 fatalities.

The number of shootings equates to a shocking 12 victims every day thus far this year.

But even as the bloodshed continues in the Windy City, quite despite the mayor’s efforts to quash the rights of average, everyday citizens, Mayor Emanuel put on his best far left, PC veneer in order to pander to the illegal alien community and proclaim his city “safe” for law-breaking illegals.

With the election of Donald J Trump to the presidency, a number of liberal mayors jumped before microphones to proclaim their fealty to illegal activities by insisting they are remaining dedicated to maintaining their self-assigned status as a “sanctuary city” and will continue to refuse to cooperate with federal immigration officers or the federal government.

“Let me be clear about what Chicago is,” Emanuel said during his November 14 press conference. “It always will be a sanctuary city. To all those who are, after Tuesday’s election, very nervous… you are safe in Chicago. You are secure in Chicago. And you are supported in Chicago.”

I suppose one must understand the word “safe” to be relative. After all, only hours before Mayor Emanuel made his announcement a weekend ended where 37 citizens had been shot with five of those killed in a mere 30-hour period.

The city of Chicago recently passed Emanuel’s “budget” with no dissent from the city council. But the plan is based on taking in at least $1.5 billion in federal funding and it is that funding that some aldermen are worried will be rescinded by a new president who ran on putting a halt to illegal immigration.

Indeed, there has already been talk of putting a halt to at last some federal funding to these law-breaking “sanctuary cities.”

Trump had made an end to federal funding for “sanctuary cities” an issue back during his campaign. In August Trump said “no more funding” for these law-breakers. “Cities that refuse to cooperate with federal authorities will not receive taxpayer dollars,” he said to cheering crowds.

The topic was broached again, of course, once the list of mayors stuck their finger in his eye with their proclamations of remaining “sanctuary cities” despite his election. Fox News commentator Charles Krauthammer, for one, said that Trump should live up to his campaign trail promise to withhold funding.

“I think Trump would be within his rights to withhold funds, and he should,” Krauthammer said recently on Special Report With Bret Baier. “And the Democrats are making a big bet — and a mistaken one — if they decide that they’re going to defy the federal government and what seems to be common sense: Control your borders.”

Newly emplaced White House Chief of Staff Reince Preibus has done nothing to ally the fears of these cities. In fact, Preibus admitted that Trump is still seriously looking at holding back federal funding to these law breakers.

Preibus recently told CNN’s Jake Tapper that these cities can’t have it both ways. They can’t take federal money and continue breaking federal laws at the same time.

The loss of federal funds would be a major blow to many of these cities already underwater with their overspent budgets.

Santa Fe, New Mexico, Mayor Javier Gonzales told CNN, “The loss of federal funds would be certainly devastating.” Gonzales insisted, though, that “we’re not going to compromise our values.”

One might wonder how long their “values” will hold up when the money really does dry up?

IF it does, though, is the real question.

At this point the ball is in President Elect Donald Trump’s court. But will he fulfill his campaign trail promise to take the starch out of the britches of these law-breaking mayors? That is the important question of the day.

One would think, though, that Trump was so insistent about this idea as he ran for president that it might be a matter of WHEN he cuts funding, not if.