The Shootout At The O.K. Corral & Gun-Free Zones

What The Shootout At The O.K. Corral Tells Us About Gun-Free Zones 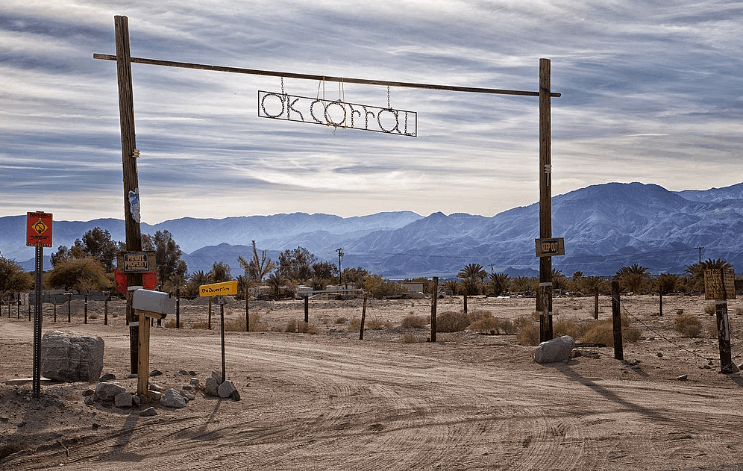 Get into a debate on the subject of guns and before long someone will bring up the Wild West. The assumption is that anyone who supports the Second Amendment also supports gunfights in the street at high noon or is so naïve as to believe that such gunfights are not at the end of this particular slippery slope.

Of course, this, as with so many other anti-gun arguments, is based on a fallacy. Most of the famous gunfighters were, in fact, outlaws. The rest were the lawmen who fought them. Take Jesse James, for example. A bank robber, murderer, and all-around bad guy, he operated outside the law and thus wouldn’t be restrained by anti-gun laws. Gunfights weren’t happening among law-abiding citizens. Sound familiar?

The most (in)famous of Wild West gunfights was likely the shootout at the O.K. Corral, which took place 135 years ago this week. It isn’t quite what those who don’t support gun rights would have you believe….

The City Council [had] passed Ordinance 9 on April 19, 1881, requiring all weapons to be left at the livery or saloon when their owners were in Tombstone. As town marshal, Virgil Earp was in charge of enforcing this.

To Provide against Carrying of Deadly Weapons (effective April 19, 1881).

Section 1: It is hereby declared to be unlawful for any person to carry deadly weapons, concealed or otherwise [except the same be carried openly in sight, and in the hand] within the limits of the City of Tombstone.

Section 2: This prohibition does not extend to persons immediately leaving or entering the city, who, with good faith, and within reasonable time are proceeding to deposit, or take from the place of deposit such deadly weapon.

Section 3: All fire-arms of every description, and bowie knives and dirks, are included within the prohibition of this ordinance.

The shootout at the O.K. Corral began when Earp tried to confiscate The Cowboys’ weapons as they entered Tombstone….

This wasn’t the only instance of gun-free zones in the so-called Wild West.

“Carrying of guns within the city limits of a frontier town was generally prohibited. Laws barring people from carrying weapons were commonplace, from Dodge City to Tombstone,” said Adam Winkler, a professor at UCLA’s School of Law and author of “Gunfight: The Battle over the Right to Bear Arms in America.” “When Dodge City residents first formed their municipal government, one of the very first laws enacted was a ban on concealed carry. The ban was soon after expanded to open carry, too. The Hollywood image of the gunslinger marching through town with two Colts on his hips is just that — a Hollywood image, created for its dramatic effect.”

It seems that those who oppose the Second Amendment have been taking Hollywood fantasy for fact when it comes to guns in the Wild West. The truth is that the most famous gunfight in American history happened in a gun-free zone, and it is the anti-gun groups who seek to send us back to the rough-and-tumble days of the old West.

These laws have been tried time and again, and have been failing America for 150 years. It is often the good guys with guns who stop the outlaws, and the outlaws who choose to carry when the law says they cannot, like that day in Tombstone, Arizona 135 years ago.

Read at The Federalist