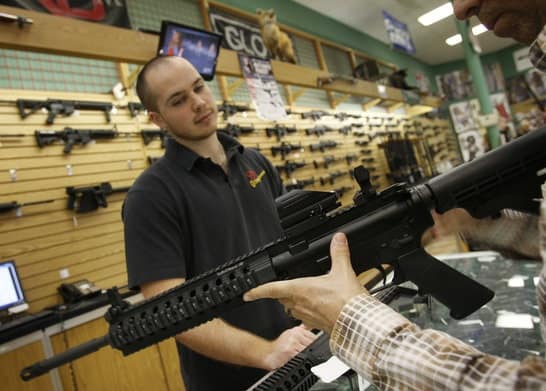 Being educated on the entire spectrum of debates on any issue is essential to maintaining our individual thought. In the wake of the Orlando shooting, the debate on gun control has been reinvigorated, with Democrats yelling louder than ever before (though perhaps a more accurate term would be ‘sitting’).

Writing about my stance on gun control has been difficult because I never grew up around them. Born and raised in gun-control Massachusetts, I never saw guns, let alone talked about them. To learn more, I reached out to my friend Jordan Stein, a gun rights activist from Liberty University.  When I asked him if he supported an assault weapons ban, his first response was, “There’s no such thing as an assault weapon.”

According to him, there is no official classification of gun known as “assault weapon,” but rather the term was invented by liberals to make gun-control marketing easier. Instead of asking citizens “to ban guns,” they would simply be asking us to ban the most powerful weapons that have ‘no place in the hands of private citizens.’

I went to investigate this claim, and found, according to Wikipedia, “The definition varies among jurisdictions,” but traditionally never includes handguns. Breitbart similarly published a statement saying “assault weapons’ is a made up term that applies to whatever best serves Democrats who are pushing gun control at any given time.”

Liberals claim that banning this ambiguous class of gun this would prevent mass-murders from happening, but according to the New York Times,

It turns out that big, scary military rifles don’t kill the vast majority of the 11,000 Americans murdered with guns each year. Little handguns do. In 2012, only 322 people were murdered with any kind of rifle, F.B.I. data shows.

The second question I asked Stein was, “Would you support banning people on the terror watch list from buying guns?” His response was that “…the problem with that list is how arbitrarily and inaccurately people are added.”

Moreover, to implement this policy would effectively suspend the due process guarantee of the constitution. Because there is no way to find out who is on the list, we cannot understand and analyze why people were put there. That gives the government enormous power to discriminate against anyone they want, including conservatives.

For these two reasons, gun control as liberals would advocate for it, lacks a general understanding of the weapon itself backed with a faulty system to operate their policy.

Read at the College Conservative