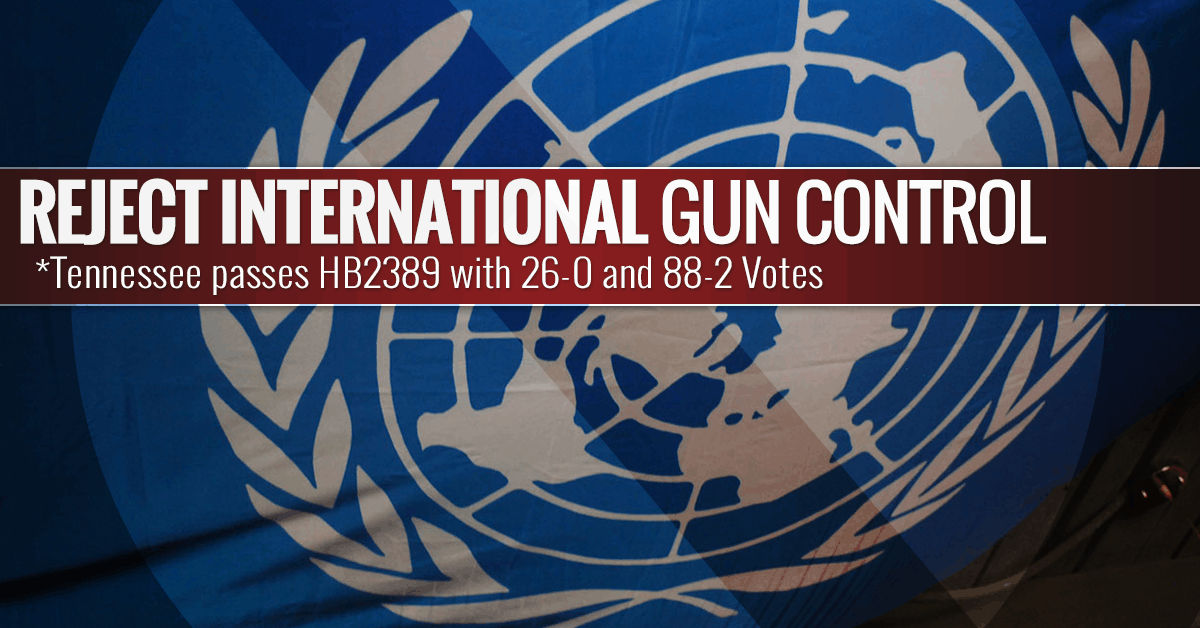 Today, the state Senate gave final approval to a bill setting the foundation to stop enforcement of gun control imposed by international law or treaty. The vote was 26-0.

House Bill 2389 (HB2389) was introduced by Rep. John Windle (D-Livingston) in January.  It would prohibit law enforcement officers from enforcing provisions of international law and treaties that limit gun rights as specified in Article I, Section 26 of the Tennessee State Constitution. It reads, in part:

“On or after July 1, 2016 no personnel or property of this state, or any political subdivision of this state, shall be allocated to the implementation, regulation, or enforcement of any international law or treaty regulating the ownership, use, or possession of firearms, ammunition, or firearm accessories, if the use of personnel or property would result in the violation of another Tennessee statute, Tennessee common law, or the Constitution of Tennessee.”

“This bill prohibits any interference of [the right to keep and bear arms] by international treaty,” said Windle on the House floor last month.

In February, a House subcommittee voted to kill the bill last month, but after heavy grassroots pressure, the subcommittee reconvened on the measure, passing it by a 3-2 vote on Mar. 16.  The full House passed the bill by an 88-2 vote.

“We held in New York that Congress cannot compel the States to enact or enforce a federal regulatory program. Today we hold that Congress cannot circumvent that prohibition by conscripting the States’ officers directly. The Federal Government may neither issue directives requiring the States to address particular problems, nor command the States’ officers, or those of their political subdivisions, to administer or enforce a federal regulatory program. It matters not whether policy making is involved, and no case by case weighing of the burdens or benefits is necessary; such commands are fundamentally incompatible with our constitutional system of dual sovereignty.”

If passed into law, the way things could play out in practice is that if the federal government were to participate in an international treaty or agreement that further restricts any firearms allowed under Tennessee law or the state Constitution, and then a local cop pulled someone over for a traffic violation and saw that firearm in the car, the cop could simply give the guy a ticket for the traffic violation and send him on his way.

Recently-proposed measures, such as the UN Arms Trade Treaty (ATT), are, as noted by Gun Owners of America, part of a plan “to bring back the framework for a global gun control regime.” Just this month, Oxfam International renewed its push for passage of the ATT. Presidential candidate Hillary Clinton has long-participated in the development and support of the ATT as well.

If passed into law, HB2389 would likely require further action to be put into practical effect. A lawsuit could be necessary to determine a violation of the state Constitution, or the legislature might need to create some mechanism to determine whether a treaty or other international action was contrary to Tennessee law or the state constitution. The latter could be included in a bill next year as well.

But even without such a bold move, the would set a good foundation to build on, and would represent an important strategic step forward. As Thomas Jefferson wrote to James Madison about the passage of the Kentucky Resolutions of 1798, it’s important to be strategic:

I think we should distinctly affirm all the important principles they contain, so as to hold to that ground in the future, and leave the matter in such a train as that we may not be committed absolutely to push the matter to extremities, & yet may be free to push as far as events will render prudent.

HB2389 now moves on to the Governor’s desk. He must sign or veto the bill within 10 days of transmittal (excluding Sunday), or it becomes law without his signature.

Tennessee residents are urged to call his office, asking him to sign the bill into law.