Turn up the pressure on Oklahoma lawmakers for Constitutional Carry!

GOP senators need to hear from you on Constitutional Carry!

Put the heat on GOP Lawmakers to Support Constitutional Carry

I’ve good news and I’ve got some bad news. 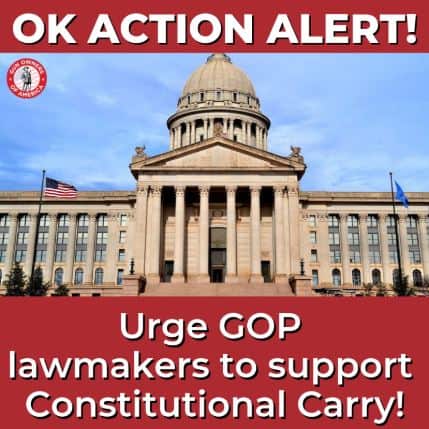 It’s exciting to see Constitutional Carry pass by such a large margin, but now is not the time to be complacent for this bill.

But Sooner gun owners know that “Constitutional Carry” is a simple principle. Gun owners shouldn’t have to seek government permission before exercising rights — especially a right protected by the Second Amendment!

Sadly, some GOP lawmakers need a polite reminder about the Bill of Rights. That’s why they need to hear from you to support HB 2597 and SB 12!

So please contact your state senator and urge him or her to give their full support to Constitutional Carry!

It’s often said that when lawmakers “feel the heat, they see the light.”

So please turn up the pressure on the GOP lawmakers right away!