Good Guy with a Gun Stops School Shooter in Illinois

Written by Associated Press Published: 15 May 2018

Good Guy with a Gun Stops School Shooter in Illinois 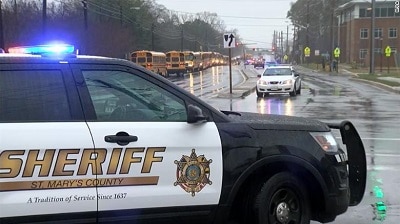 Charges were filed against a student who was wounded by a police officer after firing shots in a northern Illinois high school hallway while staff and seniors were meeting for a graduation rehearsal, Illinois State Police announced late Wednesday.

Officer Mark Dallas, who has worked at Dixon High School for five years, was hailed as a hero for shooting and arresting Milby.

“He saved an enormous amount of lives,” Lee County Sheriff John Simonton said. His comments were echoed by Illinois Gov. Bruce Rauner, who in a statement credited “Dallas for his bravery and quick action to immediately diffuse a dangerous situation.”

Police Chief Steven Howell Jr. said several shots were fired near the auditorium, and Dallas rushed to the area to confront the gunman.

Howell said Dallas chased the suspect after he fled from the school. The suspect fired several shots at the officer, who returned fire, wounding the suspect and taking him into custody.

Police said they believe the gunman acted alone and that there was no further threat to anyone in the area. Howell declined to discuss why Milby brought a gun to the school.